Gloria Steinem has crafted a life for herself by never doing what is expected of her.

True to form, Steinem wanted to use her Auditorium Speaker Series presentation to upend the traditional notion of an author speech. She opened by saying, “We have something very special this morning: an hour in this room with a combination of people that has never happened before and never will happen again.” She then expressed hope that the traditional Q&A session would be replaced with organizing and troublemaking.

Instead of the hierarchical order of author on stage beaming down at an audience of people mostly staring at the backs of each other’s heads, she said, “Imagine we’re sitting in a circle. My hope is maybe when we leave this space each of us will know something we didn’t know before.”

Steinem didn’t go to a full year of school until she was 11. Her father moved the family frequently every year, and though young Gloria was totally immersed in books, she couldn’t bring them with her. “I was rescued by librarians everywhere I went. Librarians saved my internal life.” Librarians, she said, gave her permission to read anything she liked—including novels for adults, Hardy Boys mysteries, or books on dance or India.

“Your profession is the greatest profession,” she said. “You democratize knowledge. Nothing on earth is more important.”

She emphasized how important the role of librarians is in protecting unpopular opinions and history that can’t be found elsewhere.

“We mourn Charleston, and because of censorship in schools, it’s only in libraries that we are likely to learn that Second Amendment was only wanted by the slave states. Other states were leery of arms, but the slave states wanted arms to put down slave rebellions. Guns are used in the service of supremacy by race or sex, and we would not know this without libraries.”

Steinem noted that Ms. Magazine, which she cofounded, has often been the first target of censors at libraries because it’s easier to keep someone from writing a check for a subscription than it is to pull existing books off the shelf.

Steinem admitted that she still gets nervous when speaking in public—“Each tooth gets a little angora sweater”—but she wouldn’t give up her role as a traveling organizer to just go back to writing full time. “Something happens in a room that can’t happen on a page.”

Libraries fill this need for a physical community meeting place that fosters connections between people. “Pressing ‘send’ is not organizing,” Steinem noted wryly.

In addition to reading from her own upcoming memoir, Diary of a Nomad: My Life on the Road, Steinem had a couple of other book recommendations for the crowd, including Sex and World Peace by Valerie Hudson and The Mermaid and the Minotaur by Dorothy Dinnerstein.

Her other advice for everyone in the room? Vote. “The voting booth is the only place on earth where the richest people have no more power than the poorest people.” She recommends paying particular attention to state legislatures.

Steinem closed by saying she learned from reading Native American stories that laughter is the only free emotion—you can compel fear and love, but you can’t compel laughter. “Don’t go anywhere you can’t laugh. In libraries, you should put up signs that say ‘no talking, but laughter.’” 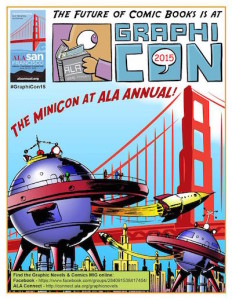