The congress theme, “Transform Libraries, Transform Societies,” includes the tagline “Reaching out to the hard to reach.” Many sessions and programs this year are emphasizing the role of libraries in national development. There are also strategies for increasing awareness of the value and impact of library services.

“Libraries must continually innovate and evolve to best serve the community around them. Transforming the library triggers a sense of urgency for libraries to reinvent themselves as the heart of the community,” said Nafisah Ahmad, president of the Librarians Association of Malaysia and director general of the National Library of Malaysia, at the August 25 opening session.

The mayor of Kuala Lumpur, Mohamad Amin Nordin Abdul Aziz, noted that this year’s IFLA theme aligns with Vision 2020, Prime Minister Mahathir Mohamad’s goal for making Malaysia a self-sufficient industrialized nation. Libraries support and enhance the nation’s priorities and are windows to global information, fostering “knowledge tourism.” (Mohamad himself appeared on a video message at the end of the program to welcome delegates and affirm his support for libraries.)

IFLA 2018 President Glòria Pérez-Salmerón encouraged delegates to fight fatalism and embrace optimism. “We are the models of change,” she said. “Societies are better, stronger, and more diverse with strong libraries.”

In the spirit of advancing both technology and the global conversation, IFLA Secretary General Gerald Leitner announced that nine of this year’s sessions will be livestreamed on the IFLA website and Facebook page and posted to IFLA’s YouTube channel. He provided updates on IFLA’s Global Vision discussion, which gives librarians around the world the chance to contribute. “No other organization in the world in the field of culture and education has been able to launch such an inclusive and democratic process worldwide,” he said to cheers from delegates. The IFLA Global Vision Ideas Store launched August 26, and Leitner encouraged everyone to contribute their ideas.

Malaysian Minister of Tourism, Arts, and Culture Mohamaddin bin Ketapi introduced a cultural performance created specifically for IFLA delegates. The dancers represented the nation’s Malay, Chinese, and Indian cultures and expressed Malaysia’s history of storytelling through oral tradition and reading from books up through the modern era’s cellphones and tablets.

In his keynote address, Ali Hamsa, Chief Secretary to the Government of Malaysia, tied the United Nations 2030 Agenda’s Sustainable Development Goals (SDG) to the promotion of reading culture in Malaysia. “Knowledge is the most powerful transformative force that helps nations evolve, and libraries are the backbone,” Hamsa said. The country is investing in that backbone through digital library initiatives that reach the hard to reach—the urban poor, rural communities, people with disabilities, and people with low literacy.

Following all the speakers and stunning performances, Pérez-Salmerón and her fellow dignitaries beat ceremonial drums along with the musicians to officially open WLIC 2018.

Another major focus of this year’s WLIC is IFLA’s Library Map of the World project and how it intersects with the United Nations SDGs. In the session “From Data to Advocacy: Using Digital Tools Like the IFLA Library Map of the World to Communicate Your Library Stories,” panelists gave examples of how their libraries and cultural organizations have demonstrated their impact on communities through storytelling.

Kristine Paberza, IFLA member engagement officer, explained that the idea for the library map came out of Global Vision discussions, specifically Opportunities 3 (we need to understand community needs better and design services for impact) and 6 (we need to ensure stakeholders understand our value and impact). The map’s questionnaire framework is designed to influence how libraries tell stories by switching from the library perspective to the community perspective.

Libraries, Paberza said, excel at answering “what” questions (action planning and delivery) but sometimes lack answers for “why” (community assessment) and “so what” (impact) questions. The map’s goal is to help with impact measurement because its audience consists primarily of stakeholders and decision-making bodies, not necessarily the library community. She advised librarians who are putting their stories on the map to aim for impact in storytelling; for example, what happened to the person who learned to use a computer in your library? That’s what stakeholders want to know. To that end, IFLA has created a storytelling manual, Libraries and the Sustainable Development Goals.

Emily Plagman, manager of the Public Library Association’s Project Outcome, showed attendees how US and Canadian public libraries are using the online toolkit to measure their value effectively and consistently. The toolkit includes standardized surveys, custom data reports, dashboards, resources, and training, and survey topics align with the SDGs. The solo librarian at tiny Burnsville (W.Va.) Public Library, for example, handed out surveys to the four kids who attended storytime, took that data to her board to ask for more support, and got funding to buy more computers.

Svetlana Gorokhova and Olga Sasina of the Margarita Rudomino All-Russia State Library for Foreign Literature in Moscow were dismayed that Russian plans for the UN 2030 Agenda made little mention of libraries. So they translated the IFLA storytelling manual into Russian, then translated all the stories they received into English for uploading to the map.

Claudia Şerbănuţă, public libraries specialist with the Progress Foundation in Bistrița, Romania, credited the library map with helping her communicate the goals of the foundation’s CODE Kids program and raise funds. It also gives her a way to share their successes and challenges with colleagues, she said. CODE Kids teaches coding to children ages 10-14 in libraries in small and rural communities in Romania, where only 30% of students finish high school. The project grew from 29 clubs in 2017 to 61 clubs this year.

Mariann Schjeide, president of the Norwegian Library Association, used color-coded data to show the decline in library funding across Norway’s 400 municipalities so that library directors in those areas can communicate effectively with politicians. She also created templates that could be customized with statistics for writing letters to newspapers.

“Don’t get into the whining trap. Tell what your library can do,” Schjeide said. It’s not enough to say that libraries are important to society—libraries need to sell themselves as contributing to the SDGs, and digital tools can help. 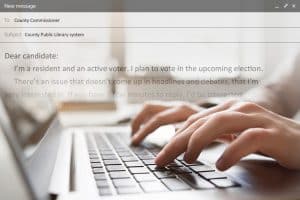 Advocating Before the Election

Find out where candidates stand on library issues 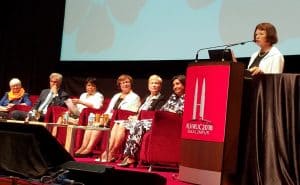