The 85th World Library and Information Congress opens in Athens

Athens, Greece, welcomed 3,636 delegates from 140 countries to the 85th International Federation of Library Associations and Institutions (IFLA) World Library and Information Congress (WLIC) Opening Session August 25. Greece is the home of philosophy, Socrates, and the Socratic method, so it is fitting that the theme of WLIC is “Libraries: Dialogue for Change.”

This year’s theme invites the international community to discuss changes in the library community through 250 sessions, 500 speakers, and 17 local library visits that will give delegates opportunities to learn and network.

IFLA President Glòria Pérez-Salmerón and Secretary General Gerald Leitner welcomed colleagues and announced their plans to launch the new IFLA Strategy 2019–2024 during WLIC. Action plans will be created around these strategies that are designed to empower librarians and create more literate societies.

Sofia Zacharaki, a Deputy Minister for Education and Religious Affairs with responsibility for primary, secondary, and special education, welcomed delegates on behalf of the Greek government. She spoke of the National Library of Greece, which was relocated in 2018 to the new Stavros Niarchos Foundation Cultural Center, and talked of librarians as the country’s leading providers of science and culture programming and resources. Eleni Agouridi, senior program officer, spoke on behalf of the Stavros Niarchos Foundation, which funds libraries and nonprofit cultural organizations around the world.

University of Athens Professor of European Integration Loukas Tsoukalis gave the keynote address, “Dialogue for Change and the Joint Management of Common Goods.” He mentioned big challenges that libraries and information can help alleviate, including climate change, environmental sustainability, deep fakes, hate speech, artificial intelligence issues, and biotechnology. He advocated for the public regulation of technologies and the internet to protect privacy, social cohesion, and human rights.

A performance created especially for WLIC and arranged by choreographer Sofia Spyratou celebrated Greek culture, libraries, and art through video and movement. The performance used the written word in ancient texts, sculpture, and engraved tablets to show the progression of culture to modern life and libraries. The opening session ended with a performance by traditional dancers in folk dress from various regions of Greece. 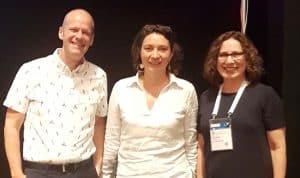