Distributing food in public libraries can abate hunger, waste, and even vandalism

The United States has a dilemma: It wastes 150,000 tons of food each day, but millions of people experience hunger and food insecurity.

“If food waste were a country, it would be the third-largest country in greenhouse emissions,” Erica Freudenberger, outreach consultant at Southern Adirondack (N.Y.) Library System (SALS), told attendees at “Food for Thought,” a June 22 session at the American Library Association’s 2019 Annual Conference and Exhibition in Washington, D.C. “Despite an abundance, many don’t have access to the food grown nearby or grocery stores.”

That’s where libraries have an opportunity to intervene.

“It started with a conversation,” said Freudenberger, who saw a need in her community to provide fresh, local produce while preventing food loss amid rural poverty and food deserts. Food pantries run by volunteers may only be open a couple of hours per week, so Freudenberger thought, “Why don’t we use libraries to distribute the produce?”

SALS, which administers 34 libraries across four counties, decided to partner with the nonprofit Comfort Food Community (CFC), based in Greenwich, New York, to achieve its goal. CFC would focus on the donations and volunteers, while SALS would oversee storage and distribution. Freudenberger described a “bumpy start” at its pilot site, Hadley-Luzerne Public Library. For instance, the program originally had an income qualification, which is a requirement when receiving state aid, but Freudenberger was uncomfortable with it

“I felt it was demeaning and violated patron privacy,” she said. “Everyone deserves access to fresh food and we wanted to celebrate that.” The program has since scrapped the income qualification, expanded to other libraries, partnered with the Cornell Cooperative Extension on cooking classes for patrons, and added a second weekly delivery at its sites

“Any hoarding behavior [among people taking produce] completely self-corrected when people realized it was a steady stream,” said Freudenberger. “Scarcity is a myth we need to vanquish.”

For Amber Williams, managing librarian of strategic initiatives at Spokane County (Wash.) Library District, the focus isn’t on fresh produce but an afternoon-snack program. The reason? A preschool parent once told her, “My kid’s homework isn’t on my radar when I’m worried about having enough food for dinner.” She estimated her library distributes 30-50 snacks to kids every day between 3-4 p.m. The year-round initiative has two federal sources of reimbursement, and so the library must adhere to strict nutrition guidelines. Still, Williams said, “This is really doable.”

“Almost everything we purchase is from Costco, Walmart, and Amazon,” she says. With the exception of cheese and yogurt, all goods are shelf-stable. And the goal is simple: “Kids are getting a snack.”

Williams said most of her staffers have reacted to the program positively and are proud to be a part of it, but for those who push back, she responds, “I’m okay putting you a little out of your comfort zone to feed hungry children.” She also hypothesized that many of the library’s “petty problems have disappeared” as a result of this program. Williams said the library used to get graffitied and egged by youth, but that hasn’t happened in years. “It’s correlation, but I do think it’s related,” she said. “We have this different relationship with them now.” 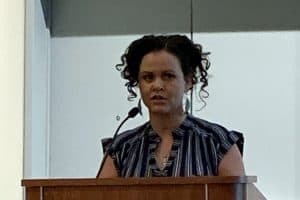 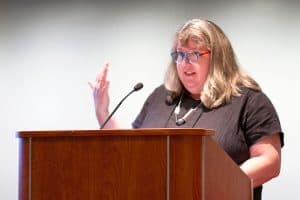 Surveying public library services and programs for refugees and immigrants