In a global climate marked by political polarization and environmental degradation, when the stakes are higher than ever before, how do individuals define themselves and become whole? Author Julia Alvarez investigated these questions in the Arthur Curley Memorial Lecture at the American Library Association (ALA) Midwinter Meeting & Exhibits on January 25.

“Writing is a way for me to engage these questions profoundly through story,” Alvarez said. “What I love about stories, the best ones, is that they allow for competing truths, for complexity and nuance, for exploring the gray areas of life.”

As an author whose work has been challenged by schools and libraries, Alvarez is acutely attuned to the life cycles of stories and their varied interpretations. When her first novel How the García Girls Lost Their Accents was challenged in schools in Richmond, Virginia, she showed up in person to make her case.

“In the gray areas, I encounter complex characters with complicated feelings, people like the offended mother and the besieged librarians in Richmond, people as complicated and confused and aching and searching for truths as myself,” she said. “That is what I love about stories: They allow us to become each other. As we read we are slowly, invisibly, pleasurably transformed into the ‘other’—we come out of a story that has moved us as a slightly different person than the one who began reading. The muscles of imagination and compassion are exercised and strengthened.”

Alvarez’s latest work is Afterlife, her first novel since 2006, which follows a retired English professor dealing with the loss of her husband, the disappearance of her mercurial sister, and a confusing entanglement with a local couple, both undocumented immigrants. News reports of the Christchurch shooting in New Zealand and the Trump administration’s immigration policies anchor the novel’s timeline in the present cultural moment, with its implicit threats and promises.

Alvarez sees her experience as parallel to that of her characters, recalling her memories of libraries as a new arrival in the US but contrasting them with her early years in the Dominican Republic under the brutal dictatorship of Rafael Trujillo, where all manner of stories were routinely suppressed.

“When I entered the library [in the US], I found a portable homeland; a table set for all. I found what we had come looking for in the United States of America between the covers of books—the grand democracy of the world of the imagination, where everyone was welcome.”

“I believe that the imagination can save us; it’s the only thing that can,” Alvarez said. “It’s the only way that we can step out of our current paradigms that we’re embedded in and posit other narratives that can motivate us to change our lives.” 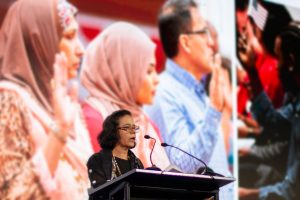 I Love My Librarian Awards

Highlights from this year’s ceremony 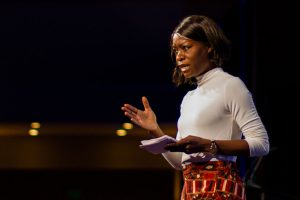 Echo Brown on the healing power of storytelling