Actor and comedian opens up in new memoir

Actor and comedian Molly Shannon is perhaps best known for the larger-than-life characters she created over six seasons as a Saturday Night Live cast member. She talked about the vulnerability that forged those characters—and the real-life personalities that populate her forthcoming memoir Hello, Molly! (Ecco, April)—at the American Library Association’s LibLearnX conference on January 23 in conversation with author Cynthia D’Aprix Sweeney.

“I have so much respect for what you do and for writers in general,” Shannon told Sweeney. “I think it’s one of the hardest things I’ve ever done, ever. Way harder than performing.” The hardest chapter to write, she said, was the one detailing the tragic car accident that defined her childhood, claiming the lives of her mother, baby sister, and a cousin and leaving her grieving father to raise her. She writes extensively about the complicated relationship with her father—an alcoholic, a closeted gay man, and an outsize personality who enjoyed jokes and pranks and encouraged Shannon’s creativity.

The best, most memorable characters always come from a place of vulnerability, she said. With Catholic schoolgirl Mary Katherine Gallagher, for example, “I wrote a character that’s a really exaggerated version of how I felt when I was a little girl—accident-prone, nervous, wanting, passionate—and then I couldn’t believe how many people related to it. People will relate to the truth if you write from within.”

“People always ask if comedians come from dark places,” said Shannon. “Life’s complicated and parents try their best. I hope that [my story] is inspiring because I felt like what I went through when I was a kid gave me this kind of resilience.”

Shannon will serve as this year’s honorary chair of National Library Week (April 3–9). “I feel incredibly honored” to serve in this role, she said, noting that her late mother majored in library science. “It feels like a real tip of my hat to my mom and to all librarians, and it’s a real honor for me to get to do that. It’s such a special place in my heart.” 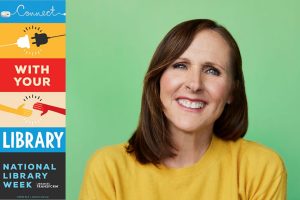 Molly Shannon Bubbles Over with Tales of Tricksterism