Privacy experts clarify the rights of minors in the library

As one of the core values of the profession, privacy is a perennial topic of discourse at ALA conferences. A June 23 session at this year’s annual conference focused specifically on the rights of students and minors using libraries, highlighting the constitutional rights of all users and the specific challenges that emerge when minors enter the equation.

“Ensuring library users’ confidentiality frees them from fear of retaliation or intimidation as a result of reading a book, visiting a website, or consulting other library resources,” said Candice Mack, senior YA services librarian with the Los Angeles Public Library system. “This is regardless of age.”

Deborah Caldwell-Stone, interim director of ALA’s Office for Intellectual Freedom and Freedom to Read Foundation and a former attorney, urged librarians who work with minors to research their local library confidentiality statutes, which vary by state. She also reviewed existing laws that come into play:

Helen Adams, a former school librarian in Wisconsin and an online lecturer with Antioch University in Seattle, described students’ traditional expectation of freedom to read and research without scrutiny, that topics remain private, and that school librarians would protect confidentiality of records.

“It’s becoming harder and harder for us to meet these expectations, and it’s not because we as school as librarians have changed, but the amount of technology being employed in schools changes the whole picture,” Adams said. She pointed to the rise in school shootings in recent decades and the related shift toward surveillance cameras; the threat they pose to student privacy grows as facial recognition technology and machine learning grow more sophisticated.

Adams shared examples of the ways school policies and systems alternately protect and compromise students’ confidentiality, often unintentionally. Often, the issue is a lack of training around privacy laws among library workers and volunteers. She recommended two remedies that helped the Kent (Washington) School District protect students’ privacy: “They realized they needed privacy training for library assistants, and also they needed a document that would go district-wide to set up privacy guidelines and expectations for students using the library,” which was eventually written into the student/parent handbook.

For more information, explore the Office for Intellectual Freedom’s guidelines and checklists for student privacy. 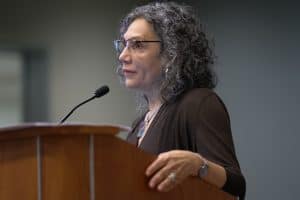 From Wikipedia to Opioids 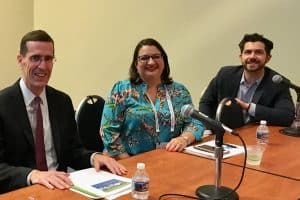