At the Closing General Session of the 2013 ALA Annual Conference, Academy Award winner Octavia Spencer spoke with incoming ALA President Barbara Stripling about her upcoming kids’ book, the challenges that come with fame, the value of mentors, and more.

During the interview, Spencer entertained an estimated 1,000 conference-goers with humorous and inspirational tales about Hollywood, acting, and growing up poor in Alabama.

One day, as she was preparing for her role as Minnie in The Help—the film for which she won an Academy Award for best supporting actress—Spencer said she realized she had the wrong outlook about life: “It wasn’t about the glass being half empty or half full; it was the fact that you owned a glass in the first place.” She said her character and the lead, Aibileen (played by Viola Davis), didn’t own a glass. “I own my glass, and I had the ability to put as much water in it as I wanted or to leave it bone-dry.” After that point, she said, everything became crystal-clear about her life and about being happy with where you are.

It wasn’t about the glass being half empty or half full; it was the fact that you owned a glass in the first place.

She has tackled roles in other socially relevant films, including Fruitvale Station, her upcoming movie about Oscar Grant, the 22-year-old African-American man who was killed by police in Oakland, California, in 2009. The incident was captured on camera phones and shared throughout the world. People either vilified Grant or held him up as a martyr. But Spencer said this film looked more at what Grant was like at home, with his mother (played by Spencer), his daughter, and his girlfriend. “It’s not about race. It’s not about an indictment about our judicial system. It’s not about an indictment of police. It’s about how we interact with each other as human beings,” she said. “It’s about our humanity.” If people can empathize with this young man, she said, then hopefully these types of events won’t occur any longer.

Regarding her new middle-school-age book, Randi Rhodes, Ninja Detective: The Case of the Time-Capsule Bandit, Spencer said she grew up reading all the Nancy Drew and Encyclopedia Brown books and views herself as “an armchair detective.” She still enjoys mysteries and thrillers and is also a martial arts enthusiast, so she decided to combine her two passions into her first kids’ novel, which she began writing 13 years ago. “There are a lot of thrillers out there for adults,” she said. “There’s not a lot out there for kids where they get to be the hero—and being a hero not by having superhero powers but by using their brains.” 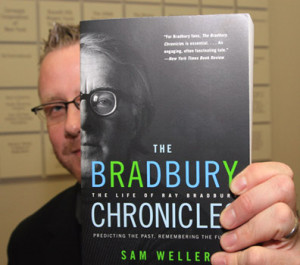 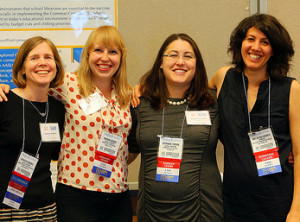 I Went to ALA for the First Time

I got three ribbons, two chances to plug Tumblr, and a strange metaphor involving flowers