American Libraries: You’ve said that you began And the Mountains Echoed with the image of a man pulling a wagon in the desert with a little girl in it, and a boy trailing behind. The questions that came to your mind, you said, are, “Who are these people? Where are they going?” Do you see this as a metaphor for Afghanistan or its people, or is it symbolic of all of us?

KHALED HOSSEINI: It was just an image I had; it was very simple but very clear. I felt there was a story buried in that image and I wanted to unlock it. I began, sort of, the way an artist starts doodling a sketch based on an idea. I just kind of started writing about it and finding the dynamics of those relationships and who they were, and it got bigger and bigger.

The novel dives into the idea of cruelty versus benevolence, and it shows that people—even the ones we love and who love us—are capable of both. Was there a particular incident in your life that prompted you to focus on this?

No, not really. It’s my general understanding of how people behave. It’s just human nature to be capable of both cruelty and benevolence. People have the ability to behave amazingly altruistic and self-sacrificial in benign ways, and also they can commit the most violent and horrible acts. And I think both realities, even though they’re conflicting, reside within people.

Interconnectivity is a major theme of this novel, differing from your first two in that it is more focused on characters’ motivations. What are you hoping people will get from this book that they didn’t get from your other two?

I write my books and people get what they get out of them. I write a story that I want to read. I create characters that speak to me and appeal to me. I go into it understanding everybody will get something different out of it. People bring their own experience, bias, intellect, background. One book can mean two different things to two different people. I do hope, as in my previous books, that people do walk away with a sense of the country, of Afghanistan. That it’s more complicated than just where the Taliban conduct their operations and where terrorists learn how to be terrorists or where there are a lot of poppy and heroin traffickers. There’s a sense of culture and history, and people are connected to the readers through their shared sense of humanity, shared experiences, and universal desires and instincts.

What was the hardest thing for you to get used to as a teen moving to the US?

Learning a whole new culture, language, learning how to fit in. At that age, even if you’re in your hometown, in your country where you were born, at 15 you’re trying to figure all that out anyway. You’re going through a transformation, trying to figure out your identity and become an adult. Throw in the whole language issue—not being able to speak the language, not understanding the ambient culture—that really complicates things and makes the assimilation process that much more confusing and complicated. That was the main thing: how to make friends and speak the language, how to navigate this very puzzling high school culture.

What do you miss about Afghan culture that isn’t present in American culture?

Culture in Afghanistan is very family-oriented. I lived in a time and place where people’s main pastime was engaging with people. It didn’t revolve around technology or entertainment sources. It was really based on how you engage with people, usually family, extended family, and friends. Socially it was a very, very rich life, and so I do miss that.

Do you find it hard to keep up with your readers’ expectations for further novels?

I suppose I would find it hard to keep up with readers’ expectations, except I don’t really try to. If you let those kinds of expectations influence you, then that will kind of taint the whole writing process. You begin to write with agendas in mind. You do kind of shut off the other voices and focus on what it is that you want to say and write a book for yourself.

At what point did you wake up in the morning and realize you were finally a successful writer?

At some point I had to start thinking of myself as a writer over the last 10 years. I can’t exactly say when. I certainly didn’t think so when I wrote my first book, or even after I was published. I didn’t even think of it when I quit medicine, because I wasn’t sure I wouldn’t have to go back. I suppose at this point I’ve come to accept the idea that this is what I do for a livelihood. And barring some sort of disaster, it’s something I should be able to continue doing because I have really wonderful readership, people who’ve been very loyal to me and have a tremendous amount of goodwill towards me and my writing, and so I can’t say when exactly, but by now I’ve since accepted that.

Are you a library patron? Do you like using libraries?

We have a public library that we’re patrons of and I take my kids there. I live four miles or so from it, which in San Jose is nothing—you drive anywhere you don’t walk. In New York it’d be a different issue. I didn’t grow up around libraries in the first 11 years of my life. In fact, they didn’t exist in Afghanistan. I’d go to bookstores a lot because I just loved being around books, those shelves of books just made me happy. I spent all my allowance at those stores. I didn’t really know what I was missing until I walked into my first library in France. And I was really smitten. When I worked as a physician, I went to the library every single day. My office was across the street from the Mountain View (Calif.) Public Library and we had an hour for lunch. I’d take my lunch to the library and spend my whole hour there. They had a lovely space upstairs where there’s a fireplace and racks of books and newspapers. I ate my lunch quickly outside, grabbed a cup of coffee, went up, read books, browsed, just loved the space.

You often do speaking engagements at libraries. Do you think you get a better reception there then at, say, bookstores or book festivals?

What you see with a library audience is basically a microcosm of the community. You see people from every walk of life. You’ll see educators, businesspeople, students, auto mechanics—people from all walks of life. It’s really interesting to see they’re all kind of bound by their shared love for reading, for books, for libraries. I really love doing engagements there because they tend to be more unpredictable then doing a book club reading, because it’s a sample of the public and they’re bound to ask anything. 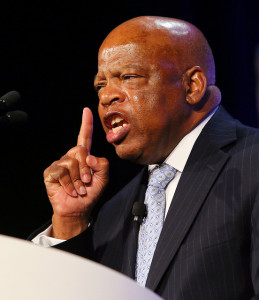 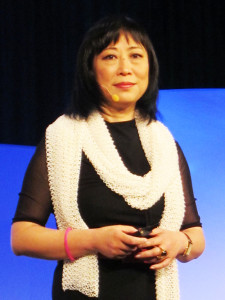