Each of the six women professed they came into the male-dominated information technology field accidentally. Weinraub started out teaching in South Korea, Frisque thought she might be a children’s librarian, Riley originally earned her degrees in music, Estlund was a classicist by training, Sendze first moved from West Africa to go to school for education in America, and McNeil began her career as an administrative assistant.

The first thing the women did was give credit to their mentors who provided opportunities for them—in many cases, male mentors. “I’m a feminist in tech,” Estlund said. “I have a fleet of male supporters that I could not do without.” Sendze echoed her thoughts, saying, “I have had two great men supporters in my life. They continue to be people I call on.” But she also emphasized that she was a feminist, not just someone who had male mentors.

However, the women also expressed concerns about the unequal status quo. They shared experiences where their authority was questioned, where they witnessed unconscious bias from their male counterparts, and even where they were on the receiving end of offensive comments. Estlund confided, “I don’t fear being the token; I fear being replaced as the token and that it won’t be additive.” McNeil explained that she taught herself and created opportunities for herself because “it was very hard to move up as a woman of color.” But they stressed the importance of speaking up when marginalization does happen. Riley said, “As a woman we have to be careful about how belligerent we are, how pushy we are, but I will not let it go.”

The women also strived to be mentors themselves. “We can do some small things to make a huge different in our staff,” Estlund said. She suggested only using last names when referring to candidates for interviews, making sure ideas are attributed to the women who voice them and offering training about microaggressions. Weinraub also said, “I constantly remind my staff of macroaggressions and microaggressions. They don’t actually see it, and I help them see it.”

Looking back, the women suggested that their audience—an audience filled with other women and three men—actively challenge the status quo.  “The biggest thing I did for myself was not be afraid,” McNeil said. After sharing her own experiences, Frisque concluded, “You pick the battles you can pick and win.” 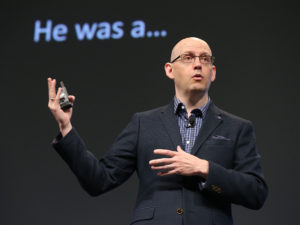 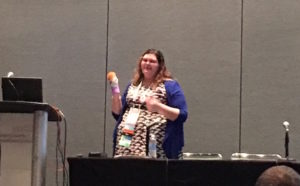 Improv techniques that work, or, just get a hand puppet