Art Plotnik, former editor of American Libraries and editorial director of ALA Editions, died August 28 in Chicago. He was 82.

Before joining the American Library Association (ALA) in 1975, Plotnik earned his MSLS at Columbia University in New York City, wrote pulp fiction, served as a press and public relations assistant and newsletter editor in the Librarian’s Office of the Library of Congress, and served as associate editor of the magazine Wilson Library Bulletin. Plotnik wrote eight nonfiction books, including Spunk & Bite: A Writer’s Guide to Bold, Contemporary Style; The Elements of Editing; and The Elements of Expression. His most recent book was the 2019 YA novel Aaron Schmink’s First Crazy Love. He also taught in the journalism department at Columbia College in Chicago and was a charter board member of the American Book Awards.

Many of his former colleagues at ALA, where he worked until 1997, share their memories below.

Art was an inspiration to me during the seven years we worked together on American Libraries—the most thoughtful and diplomatic mentor an aspiring writer/editor could hope for. He offered much wit and wisdom as we toiled away on each issue, which made work a pleasure. But he was also able to explain the art of writing and the skill of editing in ways that made sense to me. Art knew how to bring out the best in people through his own generous example. His gentle spirit and sweet smile never wavered; I can’t remember him ever being angry, although there were lots of reasons to be, especially around deadlines. Instead, we laughed a lot.

Art made a big difference in my life, and I have been immeasurably enriched by his grace, humor, kindness, and fairness for more than four decades. I am so happy to have known him and to have been friends with him and his wife, Mary, for so many years. People like Art are rare, and truly unforgettable.

Art was a good friend and an editing mentor whose witty ways of explaining the art of syntax and usage (“Let’s go which hunting” in restrictive clauses) was evident in his occasional workshops for ALA staff as well as in his books. I still find Better Than Great [Plotnik’s book on superlatives] a source of inspiration for finding a trenchant adjective to replace a mediocre one. Art was also a gifted photographer and single-handedly converted American Libraries into an eye-catching historical record for the Association’s events.

As editorial director of ALA Editions in 1990, Art came up with the concept of The Whole Library Handbook and offered me the unique opportunity to serve as its editor and brand manager. Over the years, he left a creative mark on ALA that will be difficult to duplicate.

Art changed my life when he brought me to Chicago in 1982 to work for American Libraries. I couldn’t have had a better mentor as a writer and editor, and the years he led the magazine were its journalistic peak. More recently, as neighbors in retirement, we continued our friendship. My condolences to his wife, Mary, and to the many others who will miss his wise, humorous presence.

I knew Art for more than 50 years, worked with him on a number of projects, had more fun than I have had with anyone else, and admired his skills as a writer and editor immeasurably. Art was kind, generous, a cherished friend, a man of great gifts, not least of being the most inventively, cleverly, and spontaneously witty person I have ever known.

I will continue to be inspired by Art’s originality and wit. We worked together only a couple years. However, I was reminded again and again, whether stumbling upon an old memo or looking up an American Libraries back issue, how Art could lively up the mundane.

Art Plotnik was a wordsmith without peer and a tremendous influence on me. As editor of American Libraries, he hired me and gave me an opportunity that changed my life. I made every effort to live up to the example of tact and determination that he set in his career and his life. I admired him more than I can say. Through good times and bad, even in recent months when he knew he was very ill, he never lost his delightful sense of humor and mischievous good nature. Art also left behind a great body of writing, a gift to the world from his beautiful mind.

Art Plotnik was an ALA Publishing legend, known for his brilliant wit, kindness, capacity for friendship, and interest in other people, in addition to his remarkable writing, publishing instincts, and business savvy. I’m sorry I didn’t overlap with him at ALA but understood immediately when I met him why he was so admired and well liked. He had an enviable ability to be ironic and mordant without being derisory or cutting, and there was no way to be in his company without laughter and sharp conversation. Many will miss Art, and the publishing world has lost a widely admired member of its community.

I met Art in the early 1980s, shortly after I started working at ALA. He was kind of enough to ask me to write a column in American Libraries, but what really jump-started our friendship was the habit we formed of sitting together during various meetings and, especially, at the occasional all-day staff “retreat.” It’s a shame we didn’t keep all the irreverent notes we exchanged, commenting on the proceedings and listing management terms that should live in infamy. Or maybe it’s a good thing we didn’t save those notes.

When Art retired from ALA, one of the gifts he received from Publishing staff was free golf lessons. He hadn’t played the game since he was a kid, but he took to the links with gusto. I, too, had played some golf in my long-distant youth, so it was inevitable that the two of us would attempt to revive our moribund games together. So began some 20 years of playing what we called “geezer golf,” usually just the two of us, but sometimes in the company of former American Libraries advertising rep Bill Coffee and former Booklist ad rep Art Beck. These outings, which usually took the form of the editors versus the ad reps, were notable not for the quality of the play but for the world-class banter. The legendary Plotnik wit is well documented in Art’s writing, particularly in his wonderful style guide, Spunk & Bite, which still occupies pride of place on a shelf near my desk. But I like to think his sparkling humor shined its brightest as we trudged our way through those double-bogey-filled rounds, four geezers in search of that elusive sweet spot.

Art Plotnik loved life in all its complexities, and he lived it fully, realistically, creatively, and generously. His endless curiosity, his passion for language, his sense of humor, his attunement to irony, his kindness, his nimbleness, all were charged by his ability to embrace the beauty, absurdity, and sorrow of existence. Art loved his literary calling as an inspired and adventurous writer and editor, and he channeled his ever-evolving expertise and mischievous delight into books and essays crafted to help other writers and editors, enriching many lives. He was a keen listener, drawing on his skills as both musician and writer, and he was a transporting storyteller with a standup comedian’s love of performance. He embraced the pleasures of home and reveled in world travels, sharing it all with his wife, artist Mary Phelan, in their ongoing romance. Wise, witty, candid, loving, artistic, giving, strong, and, especially over this last year, courageous, Art brought light and warmth to everyone who read him and who knew him, and he will be remembered with much gratitude and joy.

I remember Art from my earliest days at ALA. He seemed to me to be the true embodiment of what an editor should be. He was droll, caustic, and surprisingly sweet. I was fascinated by his past as a pulp-fiction writer and regret never picking his brain about it. When my wife, Carolyn, and I moved in together, we discovered that we both owned copies of The Elements of Editing. (We still have both copies.) We also found his other nonfiction books entertaining and useful, especially The Urban Tree Book, which helped us identify the aggressive, fecund but beautiful Ailanthus altissima (tree of heaven) that shaded the front of our abode. Sadly, the tree was recently removed by the city. And now Art, too, is exanimate.

Art Plotnik and I were close professional colleagues for most of our careers. My wife and I socialized frequently with Art and his wife, Mary Phelan, a well-known local artist. Mary made a portrait of me shortly before I left ALA. It now hangs in the lobby of the Lilly Library at Wabash College.

Art was probably the most important hire I made during my tenure as executive director of ALA. It came after the entire AL senior staff resigned over a difference of opinion as to how AL covered the National Commission on Libraries and Information Science in Washington, D.C. At the time we identified Art as the most reputable library journalist in the country, and after I assured him he would have complete editorial independence, I made him an offer he could not refuse.

His tenure as editor of AL was one of the most remarkable in the history of the magazine. That still left time for him to edit several books on editing guidance. He continued to write and publish a number of books on a variety of subjects after he retired.

In one of our last conversations I asked him at what age did he know that he wanted to be a writer. His response was, “About age 5 or 6!” This may explain his record as a prodigious author and editor. Although he is no longer with us, his legacy as editor of American Libraries and as a consummate editorial mentor is well established. Ave atque vale (hail and farewell). 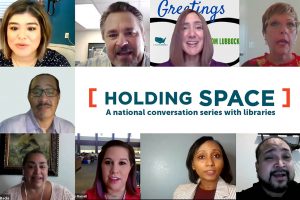 “Libraries Are Holding Space for Their Communities”

ALA president’s cross-country tour wraps up 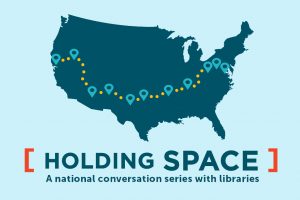 The Stories of America’s Libraries, Virtually