On April 9, the American Library Association (ALA) released The State of America’s Libraries report for 2018, an annual summary of library trends released during National Library Week, April 8–14, that outlines statistics and issues affecting all types of libraries. The report affirms the invaluable role libraries and library workers play within their communities by leading efforts to transform lives through education and lifelong learning.

During this time of rapid social change, libraries of all types are providing welcoming spaces to an increasingly diverse population; working with the community to offer social service support and health resources, career, and small business development assistance; and combating fake news by providing tools to assess and evaluate news sources. 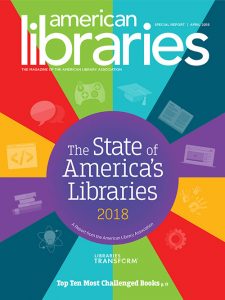 The function of libraries as community centers is readily recognized. A Brookings Institution article even referred to librarians as “ad hoc social workers and navigators” who “help local people figure out the complexities of life.” This role is especially evident, and never more essential, than in times of crisis, and 2017 had its share of adversity—from natural disasters to shootings on school campuses.

The report found that libraries continue to face challenges that carry with them the potential for censorship, to a variety of books, programs, and materials. The ALA Office for Intellectual Freedom (OIF) tracked 354 challenges to library, school, and university materials and services in 2017. Some individual challenges resulted in requests to restrict or remove multiple titles or collections. Overall in 2017, 416 books were targeted—direct attacks on the freedom to read.

Through an analysis of the number of books challenged, the OIF produced the “Top Ten Most Challenged Books” of 2017, which includes:

Other library trends addressed in the State of America’s Libraries 2018 report include:

The full text of the State of America’s Libraries 2018 report is available in Flipbook format, PDF format, and HTML. 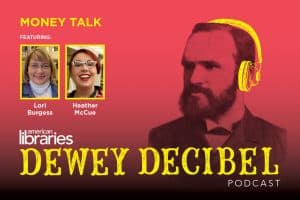