The State of America’s Libraries 2015

According to The State of America’s Libraries Report 2015 released April 13 by the American Library Association (ALA), academic, public and school libraries are experiencing a shift in how they are perceived by their communities and society. No longer just places for books, libraries of all types are viewed as community anchors, centers for academic life and research, and cherished spaces.

This and other library trends of the past year are detailed in ALA’s State of America’s Libraries Report 2015, made available during National Library Week, April 12–18, both as an American Libraries digital supplement, as well as on the ALA website at ala.org/americas-libraries and as a PDF file.

As society continues to change the way it consumes information, our nation’s libraries, librarians, and library workers continue to mirror the needs of their communities. From offering free technology workshops, small business centers, and 24/7 virtual access to ebooks and digital materials, libraries are transforming communities, schools, and campuses.

Public libraries and librarians are viewed as change agents because they address unique needs and identify trends that affect the community. The majority of public libraries offer neutral space for patrons, residents, and students to discuss and resolve critical issues. For example, the fatal shooting of Michael Brown on August 9, 2014, brought chaos to Ferguson, Missouri. Protests divided residents and caused schools and city services to shut down—but the Ferguson Municipal Public Library stayed open, providing a much-needed safe haven for the community and serving as an ad hoc school. 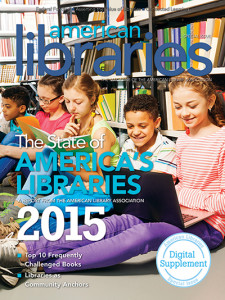 The lack of diverse books for young readers continues to fuel concern. Over the past 12 months, the library community has fostered conversations and fueled a groundswell toward activism to address the lack of diversity reflected in children’s literature—both in content and among writers and illustrators.

An analysis of book challenges recorded by ALA’s Office for Intellectual Freedom (OIF) from 2001 to 2013 shows that attempts to remove books by authors of color, as well as books with themes about issues concerning communities of color, are disproportionately challenged and banned. A challenge is defined as a formal, written complaint filed with a library or school requesting that a book or other material be restricted or removed because of its content or appropriateness.

The 2014 “Top Ten List of Frequently Challenged Books” consists of these titles:

Other key trends detailed in The State of America’s Libraries Report 2015:

The full text of The 2015 State of America’s Libraries 2015 is available as an American Libraries digital supplement, as well as on the ALA website at ala.org/americas-libraries and as a PDF file. 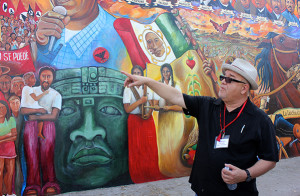 Honoring all library employees and their vital role in lifelong learning