Day two of ALA Annual Conference was a whirlwind, with sessions and events at just about every hour of the day.

You wake up excited for day two and can’t wait for the day to begin!

Then you realize you’ve been making a big mistake—misspelling the hashtag.

When you realize you have accidentally misspelled the #alaac17 hashtag on some of your tweets pic.twitter.com/adQvb1j8QX

You know that running late to a session is better than not going at all.

When you're running late to a session at #alaac17 #esuscala pic.twitter.com/8AB0tZLPAr

And once you arrive, you’re not disappointed.

Once your brain wakes up after some sessions, you begin applying library science to everything.

Most metal thing I've heard at the American Library Association conference so far: "A cemetery is an archive of bodies." #ALAAC17

In the afternoon, it’s time to hit the exhibit floor to grab even more ARCs and meet some of your favorite authors. Including Jason Reynolds!

ALA pro-tip: you can sneak in a workout after you grab the perfect number of ARCs.

After a day of sessions and exhibits, you finally head to your hotel room and weigh your goods.

When it’s time to head to the evening events or dinner, you must rely on every Chicago instinct you have.

It's strange to be back in Chicago after many years and feel my inner compass immediately reorient to "the lake is that way." #alaac17

Is any evening event complete without Lynda Barry?

By the end of the day, we think this is it: our minds are exploding.

Fireworks over the lake right outside my hotel room window (either that or a planet just exploded) #alaac17 pic.twitter.com/XYRM7r2T2X

#alaleftbehind peeps: We hope to see you next year!

So I am having some #alaac17 #alaleftbehind sadness
Okay a lot
Okay see you all next year???

CRYSTAL CARRAZCO is a membership/marketing assistant at the American Library Association. 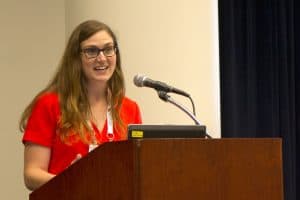 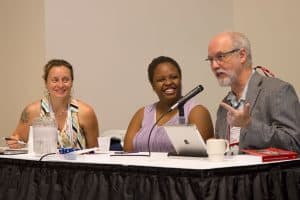 Intellectual Freedom and Open Access: Working Toward a Common Goal?