“People want to live in a place that has meaning,” author and urban planner Ryan Gravel told the crowd at Saturday’s Arthur Curley Memorial Lecture at the American Library Association’s 2017 Midwinter Meeting & Exhibits in Atlanta.

Gravel—who sparked the idea for the Atlanta BeltLine, a 22-mile multiuse trail or repurposed rail lines that will eventually connect 46 neighborhoods—should know. His “ulterior motive,” he says, was simply creating a city that he wanted to live in.

Gravel’s talk was testament to how one person with a bold idea can make a difference in his or her community. In his case, it was a graduate thesis at Georgia Tech—inspired by the walkability of Paris and having “the benefit of being unfettered by reality”—that won over local residents and the support of Cathy Woolard, a city councilor on the city’s transportation committee.

Gravel was proposing a new type of development that would support health, equity, sustainability, and economic prosperity before prioritizing the car. “People kept falling in love with this idea,” Gravel said. “Atlanta [could] seize this chance to reinvent itself.”

It’s been 17 years after his initial BeltLine pitch to Woolard, and since then, $450 million in spending on the trail has led to $3 billion in private-sector growth. This project shows there was a pent-up need for cultural improvement and has changed the way his community sees infrastructure, he said.

“The reason we don’t think of infrastructure as sexy today is because we value-engineered the sex out if it,” Gravel read from his new book, Where We Want to Live: Reclaiming Infrastructure for a New Generation of Cities (St. Martin’s Press, 2016). Writing the book, he said, was a “real journey. The book is about urban sprawl. I certainly didn’t think I’d be writing about my grandma.”

Gravel noted that more and more cities are repurposing “the scars of the 20th century” to similar effect, such as the High Line in New York or the 606 in Chicago. He also gave a nod to the library’s role in building the BeltLine and suggested its resources make a “perfect complement” to community-led urban development.

“We met in many, many libraries in Atlanta during that grassroots campaign [to support the BeltLine],” he said. “Because the public owns the vision, they came out to defend it.”

After Gravel’s talk, a Q&A session saw inspired librarians share ideas for their own communities and solicit advice for shifting infrastructure and navigating bureaucracy.

“Efforts must come in service to the vision and not the other way around,” said Gravel. 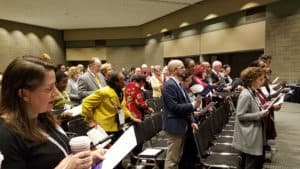 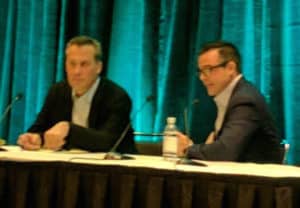 Library Service in a World That’s Getting Closer