“This is one of my favorite cities,” she announced to an auditorium packed with library professionals. “You can blow a fuse in this city, though, between the vodka and the fried oysters.”

Oscar, Emmy, and Tony-winning actor Davis was the Closing Session speaker at the American Library Association’s 2018 Annual Conference and Exhibition in New Orleans on June 26, and the crowd couldn’t get enough of her. Davis received a standing ovation before the program even started.

“I didn’t realize so many people would be in the audience!” she exclaimed.

Author of the forthcoming children’s book Corduroy Takes a Bow, her take on Don Freeman’s iconic bear, Davis was interviewed on stage by Andrew Medlar, former Association for Library Service to Children president and director of BookOps for New York Public Library, about her relationship with books and libraries, her love of theater, and her connection to the original Corduroy story published 50 years ago.

“We didn’t have bookshelves in our apartment,” said Davis. “When you’re poor, there is very little access to anything. That’s the language people don’t understand.”

“The librarian there, Denise, she would save half her lunch for me,” she said. “I was like Pavlov’s dog waiting for a tuna fish sandwich.” And beyond Denise’s generosity, Davis found a sanctuary that stoked her imagination.

“The freedom to be able to read as many books as you can, to disappear in the land of Dr. Seuss and Curious George,” she said, “was an escape for me because I didn’t want to go home.” Davis said she would stay at the library until closing every day and then run home in the dark.

Corduroy was one of the books Davis read as a child, but she recently rediscovered the book’s power when she began reading it to her daughter Genesis “over and over and over.”

“Don Freeman actually inspired me with [the characters of] Lisa and Lisa’s mom,” said Davis, who noted how impactful it was to see African Americans depicted in picture books. She was also incredibly moved by Lisa’s love for Corduroy and the adventures the bear had.

“It’s a book about friendship and it’s a book about curiosity,” said Davis. “He goes into the department store and everything looks interesting to him. It was a great way to encourage curiosity and not to attach it with fear.”

Though Davis centered her Corduroy story on the theater, drawing from experiences on Broadway, she was insistent that Lisa be kept in the book. “I thought, you know, she had a 50-year contract. I didn’t want to fire her,” Davis joked. “I like her because she loves Corduroy. I didn’t want to break up that friendship.”

Like the library, the stage was another sacred and inspirational place for Davis. “It’s a place without judgment. It’s almost like praying,” she said. “It’s a place where I found myself.”

A question-and-answer period followed the conversation between Davis and Medlar, where Davis was asked what she had recently read (Manchild in the Promised Land by Claude Brown, Braving the Wilderness by Brené Brown, and a script for the upcoming film Troupe Zero) and why she asked to change her character’s occupation in Beautiful Creatures from a maid to a librarian (“I find that someone putting me in the box of maid or best friend is a way of squelching the complexity of my humanity”).

“We want to be seen. That’s just the bottom line,” Davis said of casting people of color in three-dimensional roles. “And we don’t want a big introduction and explanation as to why we’re in it.” 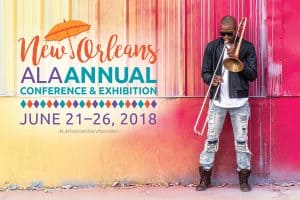 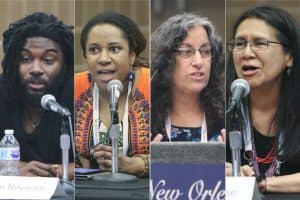