In today’s volatile and unpredictable world of publishing, the way we write and present stories will continue to evolve

I wrote here a few months ago about reading—its power and ubiquity and transcendence of format: “The authors and publishers get it; the ways in which the stories are displayed come and go, and what matters are the story and the storytelling.”

Events in the ensuing months—the Department of Justice settlement with publishers, which may or may not have handed over the entire ebook market to Amazon at the expense of Apple; the ongoing legal tug-of-war between the Authors Guild and HathiTrust; the myriad maneuvers in the library world about who gets books from whom—while dramatic and illustrative, have done nothing to disabuse me of this belief. 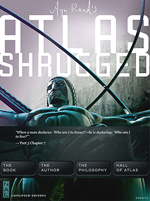 We’re just starting to get our feet underneath us about what an ebook is, can be, could be, can’t be, and so on. And then a new wrinkle emerges: the book as app. Not an app like iBook or OverDrive’s, which allows you to download an ebook, but a standalone downloadable app that is a book unto itself. Penguin (pause for hissing) is in this game, and one of its offerings is an “amplified” version of Atlas Shrugged, the paean to Objectivism so much in vogue these days.

It has several features of note: In addition to the text and navigational aids, the reader gets screenshots of manuscript pages, video and audio excerpts of author Ayn Rand’s lectures, articles, photos, a timeline of her life, etc. Even more fascinating, though, are the “reader enrichment materials,” such as the discussion guide for book groups, a trailer for an upcoming documentary, “testimonials from celebrities and business leaders” on how keen it is, and—no kidding—a “collection of shareable quotes and passages from the novel (via Facebook, Twitter, and email)” and a “fun ‘Who Said That?’ quiz to challenge readers to recall some of the most memorable lines from the novel.”

That’s quite a lot for $14.99, especially since it won the Publishing Innovation Award for fiction apps this year, beating out Pride and Prejudice and Zombies. So yes, the world of publishing and reading is going to continue to be volatile and unpredictable for a long while.

As we used to say in my long-ago days as a math student, “That’s an unbalanced equation.” Publishing and reading don’t happen without the words to begin with, so let’s pause to think for just a moment about the future of writing. We all know the importance (not to mention the difficulty) of putting the right words together in the right order to convey the right message. We also all know that the form and genre matter. You write an article differently than you would a book, email, or business letter; one of the challenges I encountered when I took on this column was writing to the correct number of words, which is harder than it sounds, at least at first.

Say what you will about the murky and disputed history of the novel, but before the widespread distribution of printing throughout Europe, there really weren’t that many long-form fictional narratives around, or at least not ones that survived.

And don’t forget: “Novel” comes to English from the Latin for “new.” It’s one thing to take a 50-year-old novel, add some bells and whistles, and make a hybrid of the familiar and the new; it will be quite another to see how people write specifically for digital, mobile, downloadable media. What stories will they tell? What rhetorical devices will they develop? What navigational and structural aids will they engender?

Speaking of novel approaches, my next column will mark 10 years of writing for American Libraries, and I’ll be using the milestone to explore new ways to continue covering issues of interest to our profession. Bells and whistles not included . . . but that’s another story.

JOE JANES is associate professor at the Information School of the University of Washington.

A New World of Data

First Winners of Carnegie Medal for Excellence in Fiction, Nonfiction

Interviews with Anne Enright, author of The Forgotten Waltz, and Robert K. Massie, author of Catherine the Great