A new mantra for the mobile web

In the early days of mobile devices, the mantra for the mobile web was “Keep it simple,” both in the visual design of a mobile website and in its content. This claim was based on the assumption that mobile device users would be distracted, in a rush, or only engaged in simple tasks. In this worldview, a mobile website is a companion to the full desktop site that has only such basic data as address, directions, contact information, or hours of operation. For anything beyond the minimal and mobile-appropriate, smartphone users were expected to visit the full desktop website.

Smartphone users’ tasks are not necessarily microtasks in the sense that they are easy or simple to complete. Looking up or finding certain types of information is complicated and cannot be completed in a matter of minutes. The Edit/Create type often requires a considerable amount of time and concentrated effort. Those are microtasks in the sense that they are elements of a larger project or broader workflow. People are willing and able to turn to their mobile devices for complicated tasks that can take longer than a few minutes.

It’s also a myth that mobile users are in a rush. People do not use mobile devices only when they are on the move. Studies by Nielsen, Yahoo, and Compete.com show that a significant portion of mobile internet use takes place at home.

In fact, a growing number of people are mobile-only internet users. The UK mobile research company On Device Research conducted a survey of more than 15,000 people in 12 countries in 2010. The results showed that in the UK and US, a surprising 20% of internet users are already mobile-only; in African and Asian markets, the number is greater than 50%. International Data Corporation, an American market research firm, also predicted that in the US the number of consumers accessing the internet through mobile devices would surpass the number doing so on PCs for the first time in 2015.

After the introduction of the tablet, people’s expectations about the mobile web have only gone higher. The boundary between mobile devices and desktop computers is already beginning to blur in people’s minds.

Library users are no exception to this trend. As seen from a 2011 MIT Libraries survey, patrons are willing to use library mobile websites for research and are interested in such sophisticated features as annotating academic papers and ebooks.

The mobile web is no longer an inferior or a complementary means of accessing the internet. It is a competitor to the desktop web and may soon be accessed more frequently than the desktop web. That is why offering only a basic set of information and limited features on the mobile web is no longer a viable strategy. Wroblewski wrote in 2011: “Don’t dumb things down on mobile” (Mobile First, p. 22). This is the new mantra for the mobile web that reflects today’s user behavior. 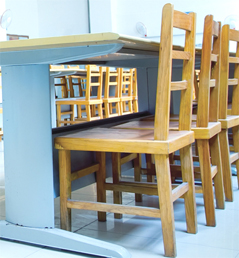 Is Your Library Plus-Size Friendly?

With obesity rates rising, libraries need to meet the needs of larger patrons and staffers