Cafés, bars, souvenir vendors, and street artists line the narrow and densely populated promenades in the old colonial center of Santo Domingo, Dominican Republic, where hawkers lure customers with promises of bargain prices. At night, throngs of young people stroll the oceanside of the Malecón, eating sweets and listening to street musicians, while the museums and libraries a short walk away close for the night and tourists are safely ensconced in their walled resorts and hotels.

On the streets of the Dominican Republic capital, evidence of President Leonel Fernández’s leadership appears in the form of high-rise construction projects, swank tourist resorts, handsome government buildings, and fast food restaurants. But the limits of prosperity are also evident in the wares of dozens of street vendors and shabby shops still struggling to survive in a nation where poverty is still as apparent as progress.

Interviewed in his office in the six-story Juan Bosch Library at the Global Foundation for Democracy and Development, President Fernández talked with American Libraries about the challenges ahead. The library is an impressively stocked and staffed research facility that began with Fernández’s personal collection and is more comparable to a presidential library than any other US equivalent.

A book lover who spent much of his childhood in New York, Fernández began the final four years of his three-term presidency focused on the construction of a world-class library, the Pedro Mir. He was initially elected to a four-year term in 1994, then twice more in 2004 and 2008, becoming the first member of the Dominican Liberation Party, founded by Juan Bosch.

“There is a direct correlation between libraries and development,” Fernández says. “I don’t know of any country that has been built without libraries.”

The successes libraries have enjoyed under the leadership of Fernández and his wife, who became the nation’s vice president in 2012, do not diminish the magnitude of the challenges they face. Education tries to trump poverty in this nation of 10 million people, a third of them clustered in the teeming tropical city of Santo Domingo. In 2013, the government’s expenditures on libraries was $11.8 million, and its expenditures on education was $2.2 billion (4% of the country’s gross domestic product), according to Frank Olivares, executive director of the vice president’s office.

In 2012, the Dominican Republic received $1 million from the Bill & Melinda Gates Foundation’s prestigious Access to Learning Award to fund the country’s chain of Community Technology Centers (CTCs). These centers provide all residents unprecedented free access to high-tech tools, including training materials and internet access, among other services, to reach the poorest of the poor in this nation of more than 10 million, of which one out of every three people lives below the poverty line.

Since 2004, the country has invested in 93 CTCs, a modern central library for children and young adults, and a new national library. Ten CTCs will follow, thanks to the Gates money: Five are underway and five more are in the planning stages.

Vice President Margarita Cedeño de Fernández has championed the CTC program. She tells AL that attacking poverty with education is the only way to push the Caribbean nation into a culturally and economically healthy future. “The richness of any country is in its people,” she says.

The centers serve as community hubs for cultural events and celebration. They also work closely with Progresando, the country’s social and economic program, to provide employment training, childcare, and microloans to start businesses, among other things.

Cedeño de Fernández says the goal of the CTCs is to create “a gathering place for the community” that will help people become “the owners of their own destiny.”

The role of CTCs

Dozens of locals fill computer rooms, study rooms, and workshops at the CTC in the southern coastal city of Boca Chica. Inside the bright orange and green building are computer classes, activities for children with special needs, and instruction in health care and environmental awareness.

The CTCs are staffed by local residents, and, according to Teresa Peralta, who oversees all 93 centers, each community must agree to take charge of its own CTC, similar to the way Andrew Carnegie insisted he would build libraries in the US only if communities agreed to support them in perpetuity.

The Boca Chica CTC is adjacent to Centro de Capacitación y Producción Progresando con Solidaridad, a learning facility for women, particularly single mothers. Another of Cedeño de Fernández’s initiatives, the center offers an opportunity for women to learn life skills while their children experience daycare in a nurturing environment.

At the CTC in Villa Mella, about an hour’s drive north of the capital through feverish Santo Domingo traffic, a small group of young students in an intensive course are studying English. When asked why, they unanimously agree that the better their English, the better their chances of landing a good job.

“We have big expectations for education,” says Peralta. “We want people to develop the reading habit, to empower families with knowledge, and to close the digital divide.” She adds that it is absolutely necessary to educate and train people in order to “develop our country.”

Library for children and youth

Biblioteca Infantil y Juvenil República Dominicana, a two-story library for children and youth in central Santo Domingo, contains a colorful, well-lit series of special purpose areas for various age groups, complete with computers and free Wi-Fi throughout the building. Except for one adult room and a toddler area, the spaces are off-limits to older folks. Young library workers are on hand to guide and help, but they avoid re-creating a classroom setting, instead concentrating on individual learners, including users with disabilities. Teens have a lively social reading room full of books, a computer area for games and social media, and another computer area for group learning.

Dulce Elvira de los Santos, director of the youth library, is a children’s author and puppeteer whose infectious smile keeps kids and staff focused on the wonders of what her library offers, rather than the fact that it is the only one of its kind in the Dominican Republic.

“This library is designed to be an example for the country of what libraries can be like,” she says, showing off the video room, the 120-person auditorium, and a book collection of more than 200,000 titles.

In sharp contrast, a visit to a typical high school reveals how entrenched the old notion is that a room full of books with restricted access somehow constitutes a library. At the Liceo Escuela Nuestra Señora del Carmen in Santo Domingo, computers are in the lab and books are in the library, and never the twain meet. But the teachers all agree that a library is not a book warehouse, and they eagerly await the arrival of several new computers that will soon enhance the room.

Back at the youth library, about 60 Dominican library workers gathered September 26, 2013, in the auditorium for a discussion about the perceived threat to libraries posed by technology—the opportunities still not evident to many. Several wondered about the future of libraries in a technological age. Others seemed to recognize the need for a library to be a multimedia community learning center, but they still registered doubt that libraries in the Dominican Republic can overcome their daunting financial and technical challenges.

Opened in its modern incarnation in 2012 and named for Dominican man of letters Pedro Henríque Ureña, the National Library in Santo Domingo was built on the site of the home of Rafael Leonidas Trujillo Molina, the tyrannical strongman who held power over this country from 1930 until his assassination in 1961. The library stands as a repository for the European, the native Taíno, and the African influences that shaped the Dominican Republic and continue to affect it today.

Maricela Molina (no relation to Rafael Leonidas Trujillo Molina) is director of technology and leads a tour through the far reaches of the National Library building, parts of which are still waiting for carpeting. She explains that newspapers, documents, and other library materials are being transferred slowly and carefully from temporary storage to climate-controlled rooms, where the rarest of the rare—­including some books related to the island of Hispaniola, dating back as far as 1690—can be kept safely for posterity.

“My passion is the library [and helping] people find what they need,” Molina says. She envisions a library that will save the national record, become the archive of government, and serve as a repository for all that is published in the country—in whatever medium.

While leaders in the fields of education and librarianship in the Dominican Republic may lack the resources that many in the profession take for granted, librarians like Molina say they are proud of their work. It’s a sentiment heard throughout the country.

The Dominican Republic—like almost every country in the world—does not have the public library tradition that has made libraries so strong in the United States, nor do librarians have the same professional status. President Fernández emphasizes that the most urgent need for libraries in the Dominican Republic is to “professionalize our librarians,” and that means education and training. Most of the country’s library workers do not have a college degree and fewer still have completed postgraduate studies.

The president’s signature library initiative during his current term has been the Pedro Mir Library. On any given day of the week, the library—located at the Autonomous University of Santo Domingo—is a beehive of students engrossed in books and computers. Of the roughly 130 libraries located throughout the country, Pedro Mir is undoubtedly the most important, and it is accessible to the public. The modern facility, which opened in 2005, has more than 800,000 items and serves a student body of 170,000 six days a week, with plans to open on Sundays. On an average day, 8,000 students use the library.

Pedro Mir’s entire catalog is computerized, and the library provides online services to the university’s 14 regional centers. The biggest challenge is “keeping up with technology,” says one senior staffer who has been a librarian for more than 35 years. She and other seasoned colleagues have witnessed the creation of a library that is more of a center for research and investigation, and—even though the stacks are still closed—less and less a storage facility for the printed word. They have also seen the library transform into a true community learning center, with access to knowledge in whatever medium it resides.

As Peralta puts it, the biggest high in her job as director of the CTCs is being welcomed into a grateful community and thanked “because we are giving children something they have never had before. We are involving people in the development of their own country, and we believe people deserve the best of the best.”

­­­­­­­­­­­­­­­­­LEONARD KNIFFEL is a Chicago writer and former editor and publisher of American Libraries. This article is based on interviews and library visits he conducted in the Dominican Republic September 22–27, 2013. 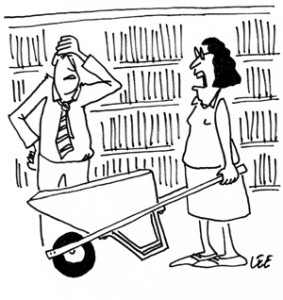 Weeding is not for the faint of heart