If you don scuba gear, dive off of Santa Monica Pier into the Pacific Ocean, and search the surrounding waters, the story is told, you’ll eventually find hundreds of metal canisters containing silent films. They were reportedly thrown off the pier in the 1920s and 1930s by film studio executives who needed to make room in their vaults for sound pictures, which were steadily outpacing silents both as the industry standard and in popularity with the moviegoing public. 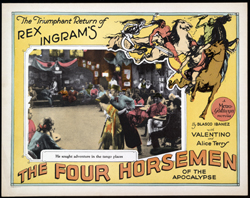 Steve Leggett, program coordinator of the National Film Preservation Board at the Library of Congress (LC), laughs as he retells this Hollywood urban legend. Nevertheless the story contains truth. Scores of films were destroyed during cinema’s early years by studios that viewed silents as obsolete. These silent classics were not seen as works of art to be saved and preserved for future generations; they were simply outdated mediums standing in the way of progress. Untold numbers were destroyed, mishandled, lost, or stolen.

The Survival of American Silent Films: 1912–1929, a report published in December by LC and the Council on Library and Information Resources, examines that loss in detail. It reported that only 14% of films produced at the height of the silent era exist in their complete, original domestic-release version in 35mm. Another 11% are complete but not original releases—they are either a foreign-release version in 35mm or a print with less than 35mm image quality. Another 5% are missing either a portion of the film or are abridged. The remaining 70% are believed to be completely lost.

The report is alarming but not surprising, says Leggett. The declining state of America’s film heritage is a widely discussed topic among film industry professionals, film librarians, and archivists. “It’s a snapshot of where we are now,” notes Leggett. However the report’s main function is not to provide a snapshot but to serve as a clarion call about the plight to save cinema’s past, as well as a strategic battle plan for the future. “It’s helping us bring public awareness to the situation and to prioritize what we need to do,” he says.

Jan-Christopher Horak, director of the University of California, Los Angeles (UCLA) Film and Television Archive, shares Leggett’s sense of urgency about film’s future. “We’re under the gun now. We see the end of film. Preserving what we have now is vital.”

Libraries and archives are leading the way in these efforts, collecting films in all formats and using modern, state-of-the-art technologies to conserve and preserve them for posterity and enjoyment by future generations. Along with physical copies of films movie ephemera are also being saved: shooting scripts, papers by famous filmmakers, vintage posters, and more. The all-encompassing nature of these efforts ensures that the world’s film heritage will thrive.

The government gets involved 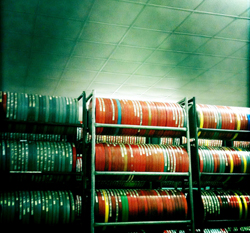 The Motion Picture, Broadcasting, and Recorded Sound Division is responsible for the acquisition, cataloging, and preservation of these collections, which are held at the Packard Campus for Audio-Visual Conservation. The massive 415,000-square-foot complex in Culpeper, Virginia, has more than 90 miles of shelving for collections storage, 35 climate-controlled vaults for storage, and 124 individual vaults for flammable nitrate cellulose film stock. The campus also serves as a hub for preservation efforts, where 103 technicians, catalogers, and preservationists use modern reformatting capabilities to convert audiovisual media formats of all types, including obsolete formats dating back 100 years, from unstable to stable mediums. These materials are then digitized and the campus provides long-term safekeeping in a petabyte-level digital archive.

The Packard Campus holdings can be accessed by appointment only at the Motion Picture and Television Reading Room in the James Madison Building in Washington, D.C., and only by individuals doing research or university students working on projects endorsed by professors. Once requested, films are then shipped from the Packard Campus for viewing in the Washington reading room, if not already available in digital format.

The Motion Picture and Television Reading Room has more than 650,000 items relating to the movie image available, from paper roll prints deposited in the Copyright Office as part of registration of motion picture productions in the silent era to original films on President Theodore Roosevelt. It’s one of the largest assemblages of pre-Hollywood American cinema in the world.

UCLA has the second-largest collection of film and television programs in the US, and like LC, the school is a leader in film preservation and educational resources. “As a part of UCLA, we have a research archive and a film center for students and researchers from all over the world,” Horak says. “But we also exist to educate the public about the broad palette of films offered over the years.”

A staff of 60 archivists, preservationists, and catalogers makes sure that the collection is both available for the public and preserved for future use. Since 1977, the UCLA has restored hundreds of films, including Night of the Hunter, A Star is Born, Double Indemnity, and many other classics. New prints of these films can be viewed by appointment at the UCLA Film and Television Archive’s Research and Study Center. UCLA also lends more than 500 films per year to universities, libraries, museums, and film festivals for screening, in addition to licensing certain films for commercial use.

UCLA’s work is extensive but far from over. Horak sees digital and online availability as the keys to film’s survival. Selections from their collection are currently streaming on their website, as well as on YouTube. Horak sees this as a key component of both UCLA and film’s future. 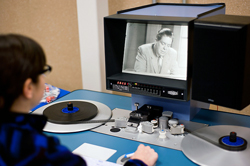 “The future is digital and online. Archives will have to be transformative. The classic model of archivist as gatekeeper—digitization has blown that out of the water,” he says. “Archives have to be places where users can pick and choose what they want. We’re moving towards this.”

Rachael Stoeltje, director of the Indiana University (IU) Libraries Film Archive in Bloomington, agrees with Horak’s assessment. IU’s collection contains more than 71,700 items spanning almost 80 years of film production, including many rare and last-remaining copies of influential 20th-century films. Stoeltje developed an 11-point prioritization plan to preserve these films, and digitization is a key component. She hopes to convert a large percentage of the holdings to digital over the coming years, beginning with the most fragile, deteriorated, and historically and culturally important pieces.

In the meantime, the Avalon Media System helps Stoeltje deliver available digital holdings to patrons. Avalon is an open source system for managing large collections of digital audio and video files, developed by IU and Northwestern University and funded in part by a three-year National Leadership Grant from the Institute of Museum and Library Services. The system allows digital content to be uploaded quickly and at a moment’s notice to meet individual patrons’ needs, Stoeltje says. If a patron needs a film from the IU collection that is already available digitally but not online yet, she or an archive staffer can upload it to Avalon and send a link directly to the patron’s workstation.

The best of both worlds

The Louis B. Mayer Library at the American Film Institute (AFI) in Los Angeles serves a very specific clientele, primarily AFI conservatory fellows and faculty, as well as film students from the University of South California, Los Angeles. It’s a small library, open by appointment only to the general public, with more than 10,000 books on film history and filmmaking; 10,000 digital images, 6,000 screenplays, including early drafts, final drafts, and post-production papers; and 8,000 DVDs and Blu-rays available. The library also has a unique film collection.

More than 2,500 short films created at the AFI Conservatory and in the AFI Directing Workshop for Women (DWW) are held in both onsite and offsite climate-controlled vaults, including films by Terrence Malick and David Lynch, and DWW alumni Maya Angelou and Anne Bancroft. These are important works that capture important filmmakers and artists at the cusp of their careers. The library also collects audio, video, and transcripts of the AFI Harold Lloyd Master Seminars, a series of valuable interviews conducted at the institute with filmmakers such as Alfred Hitchcock and François Truffaut.

AFI librarian Robert Vaughn, who earned his MLS at San José (Calif.) State University, is dedicated to making these short films and footage available outside of the walls of the Louis B. Mayer Library.

Vaughn and the library staff are currently in the process of digitizing AFI’s film archives, with an eye toward open access. “We don’t want to be specifically a brick-and-mortar location,” he says. “We want to share our films with as many people as possible.”

Vaughn sees digitization as vital to a library’s and film’s survival. “Film librarians and archivists have to have a hybrid approach these days. We have to keep one foot in the present and one in the future and be aware of how patrons are accessing information,” he says. “The future of our library—and really any library—is to adapt to changes in user behavior and in the delivery and access of information.

“Before [this project began], you had to come to campus to access these films—now they’re available on iTunes. These efforts will increase access to our content and overall serve to preserve the legacy of America’s film heritage.”

PHIL MOREHART is associate editor of American Libraries. Prior to joining American Libraries, he served as publications editor for Facets Multi-Media, a Chicago-based cinema arts nonprofit. He also wrote on film and the arts for Chicago Journal and Cincinnati (Ohio) CityBeat newspapers.

Librarians Discuss the Future of Makerspaces