Over the past century, superheroes have ingrained themselves in society’s collective psyche and permeated pop culture. Stan Lee, the man who created many of these characters for Marvel, will share his insight on the importance of comic books to literacy in his Auditorium Speaker Session at the 2014 ALA Annual Conference and Exhibition in Las Vegas. American Libraries spoke with the legendary comic book writer in April to discuss the role of comic books in children’s literacy, the lack of diversity among superhero characters, and what secret superpowers he possesses.

You’re known for making movie cameos. What is your favorite one to date?

Stan Lee: I did one in the new Captain America: The Winter Soldier movie. I think it’s a very funny one.

We’re pretty partial to the librarian you play in The Amazing Spider-Man. Do you have a spidey sense?

Which of your superheroes do you most closely relate to?

All of them. I have the strength of Thor, the agility of Captain America, and the wit of Spider-Man. I’m really all of them. Please say I said it with a laugh.

The protagonist of your latest work, Zodiac, is Chinese American. Why haven’t there been more culturally diverse superheroes, and is that trend changing?

It’s changing very rapidly. At POW! Entertainment [Lee’s production company], we’re doing a movie called The Annihilator, which features a Chinese hero. It’s not a Chinese movie; it’s a movie for the world—the lucky world that will receive it. We have also created a new Indian superhero for India called Chakra. He’s a teenage boy with a power. And we’re working on a Latino hero. We’re trying to have as many different cultures and nationalities represented as possible, because it really is one world.

In the early 1970s, the Comics Code Authority [an oversight group] refused to approve three issues of The Amazing Spider-Man that portrayed the perils of drugs. You published them anyway. Why was that important to you?

Well, the important thing was to make money. [Laughs] But to tell you the truth, I have listened to teachers, professors, and scholars say that reading comic books is one of the best ways to teach literacy to young children. Because in order to enjoy and appreciate and be wrapped up in a comic book, you have to be able to read the dialogue balloons. Otherwise you won’t know what’s happening. The youngster forces himself or herself to read what is lettered there in order to follow the story. So many teachers have told me that when they put comic books in the classroom, children get better marks more quickly in English and in literacy than in any other way. There is something about the physical look and feel of a comic book that young children love.

What do you say to librarians who may be uncertain about including comics in their collections?

A library should be a way for a child—for anybody—to get the sort of reading that he or she wants, and hopefully that will benefit them. Not all stories in comic books are great; some may seem silly or ridiculous or a waste of time. But the youngster has to be able to read the book. And for that reason, comic books should be in every library.

How do you feel about the role of ebooks as they relate to comic books?

Comic books may become less popular after a while if youngsters can get the same stories on their computer screens. But kids seem to enjoy holding a comic book, folding it, putting it in their back pocket, showing it to other kids, carrying it, collecting them. It’s a little hard to collect them if you’re doing it electronically.

You started your career writing obituaries and press releases. What advice do you have for aspiring writers?

The one most important thing is just to read a lot. If you’re not a big reader, I don’t know how you could become a professional writer. Read everything you can, read every style of writing, and learn to differentiate between the way Jules Verne wrote and the way Mark Twain wrote, and get to appreciate what makes some writing good and some bad. You have to really study it yourself. I don’t think anyone can be taught to be a writer. 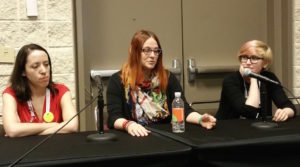