Several years ago, a teenage girl approached Kara Watson, librarian at the Carrboro (N.C.) High School for help: Some of her fellow students had added inappropriate remarks to the girl’s unsecured Facebook account during study hall. Watson printed all the evidence, had the girl delete the offending remarks, and reported the incident to the principal.

Before study hall was over, the principal was dealing with the perpetrators.

“We handled it all immediately,” Watson tells American Libraries. “That’s a key role of what librarians can do in schools to be a force against bullying. If the students know you’re there, and that you’re an advocate for them, they’ll come to you.”

According to statistics from the Olweus Bullying Prevention Program, one in seven students in K–12 is either a bully or a victim of a bully, and 15% of all school absenteeism is directly related to fears of being bullied at school.

As a safe haven, it seems only natural that school and public libraries embrace the burgeoning anti-bullying movement that has been sweeping the nation for the past few years in reaction to high-profile stories of young people feeling so harassed and hopeless that they have dropped out of school or committed suicide.

“You need to be a very consistent force in students’ lives,” Watson says. Her philosophy is to be friendly and approachable so students see her as a trustworthy adult to turn to if they are being bullied or witness such behavior. She says she rejects limiting her role to being “that stereotypical librarian who’s shushing and laying down the rules.”

According to the 2011 edition of School Libraries Count! a national longitudinal survey by ALA’s American Association of School Libraries of school library programs across the nation, 70% of 4,887 librarian respondents indicated they tackle the topics of cyberbullying, harassment, and stalking behavior at school. The survey reveals just how prevalent the problem is in many schools.

“When we were kids, if someone was picking on you at school, you went home and that was your reprieve,” says Watson. “But now it’s just persistent. Kids can text each other all the time.” She says she teaches students how to block unwanted texts and how to configure Facebook for maximum privacy in order to control their social media environment.

“School librarians can play an active role in helping each child become a responsible and caring cybercitizen, ready to take action against the bullies online,” wrote Kathy Fredrick, director of libraries and instructional technology at Shaker Heights (Ohio) City Schools, in the September/October 2013 School Library Monthly.

For Watson, that means starting with freshman library orientation. She introduces herself, learns everyone’s names, and begins to teach the concept that “digital life is life.” She follows up with a unit in 9th-grade health class in which she recounts local cyberbullying incidents from the news, such as the case of a teen in an adjourning county who was harassed in a sexting incident.

Although the Children’s Internet Protection Act does not require public libraries to teach patrons how to combat bullying, several libraries have taken a public stand against such behavior.

In October 2012, hundreds of people turned out at the inaugural Bullying Stops Here rally at the Buffalo and Erie County (N.Y.) Public Library (BECPL). Just 13 months earlier, a local 14-year-old boy named Jamey Rodemeyer had committed suicide after suffering years of bullying over his openness about being gay and activism against homophobia.

“It was something that very much hit home,” says BECPL Director Mary Jean Jakubowski. She says the library took the lead in contacting other groups that conducted similar campaigns in Erie County and made Bullying Stops Here posters for elected officials, children, and adults to sign as a commitment to standing firm that “bullying stops with me.” A banner version of the poster hangs in the library year-round.

Patrons have told staff members that seeing the banner reminds them “the library is a safe haven to us. We know that we can feel comfortable here. We know we can be ourselves here.”

BECPL holds its Bullying Stops Here campaign in October because it is designated National Bullying Prevention Month. The month’s activities—themed concerts, lecture series, and educational activities—are “a celebration of life and a celebration of individualism,” Jakubowski says. “When something significant goes on in the community, be supportive of the situation, and show that libraries are there for people and can be supportive through the resources we provide.”

The Orange County (Fla.) Library System (OCPL) holds anti-bullying activities in March, dubbing the event March Against Bullying. Tracy Zampaglione, public relations administrator for OCPL, says the library system’s cyberbullying education has been a response “to what was an obvious community need.”

OCPL also offers banners for people to sign and a lecture series, and an online internet-safety tutorial from the sheriff’s department. During its inaugural month, in March 2011, about 2,500 people signed the anti-bullying pledge, and more than 500 attended online safety events at the library. That number has grown to more than 1,000 over the years.

How does a library get started on such a campaign? Public libraries should “just do it,” Jakubowski advises. As for school libraries, Watson recommended finding one teacher who is also interested and building from there.

Jakubowski adds: “This took a village to put together”—a microcosm of involved people “that brought the community together.” 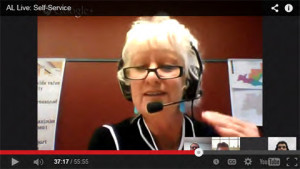