The first thing that Jennifer Davis tells patrons who come to her seeking medical information is not to Google their symptoms. “It’s the worst thing you could possibly do,” says Davis, director of Hall Memorial Library, which serves the communities of Northfield and Tilton, New Hampshire.

Instead, Davis assists patrons with their health care questions by helping them find information on Medline-Plus, an authoritative, free website where the public can find health information in more than 40 languages.

Although Davis, a former medical librarian, is familiar with health care topics, most public librarians do not necessarily have a medical background. Still they may be faced with an assortment of health-related questions from the public every day.

More than 90 million adults in the United States have low health literacy—how well a person can get needed health information and services, and how well he or she understands them—according to the National Library of Medicine (NLM). NLM produces MedlinePlus, a ­National Institutes of Health (NIH) website that’s just one of several consumer health resources available to the public.

NN/LM, which is split into eight regions, supports a network of libraries to increase equal access to health information with resources from NLM through educational opportunities, exhibits at conferences, and funding for health information outreach projects, such as the one undertaken by NN/LM NER. The network currently has more than 6,425 members, of which 1,322 are public libraries, according to NN/LM.

Each year, NER—one of the smaller regions—identifies specific geographic areas that are medically underserved for a “Focused Health Information Outreach” project. In 2014, the entire state of New Hampshire was selected for the project, which ran from September 2014 to May 2015.

After identifying local health information needs, and barriers and boons to the project, NN/LM NER partnered with the New Hampshire State Library in Concord to train librarians—including Davis—from each of the state’s 11 library cooperatives on how to use MedlinePlus. Eberle led two training workshops in February and March 2015.

Those librarians in turn presented the same training at their co-op meetings. NN/LM NER provided each trainer with a USB stick containing Eberle’s PowerPoint slides and an outline to present the workshop, along with educational materials to distribute to attendees.

Ultimately, the “train-the-trainer” project, which was funded by a $3,000 award from NN/LM NER, reached more than half of the libraries in New Hampshire, and more than 50 public libraries added the MedlinePlus widget to their websites, according to Eberle.

Post-project evaluations indicate that 98% of attendees thought the training improved their ability to find information that they could trust on the internet, up from 75% before the training.

As a result of the effort, post-project evaluations indicate that 98% of attendees thought the training improved their ability to find information that they could trust on the internet, up from 75% before the training.

Janet Eklund, administrator of library operations at New Hampshire State Library, says the most important outcome to emerge from the project is the education of librarians and their confidence providing consumer health information.

“Now, of course, they’re not going to be providing medical advice, but they’re comfortable in using the resource so that they can help educate their patrons to use it themselves,” Eklund says. “I think an increase in comfort level, knowledge, and skill is an excellent outcome for a program like this.”

Public libraries throughout the country are taking advantage of NN/LM and NLM resources to provide health information and offer their own health information services and programs, including several in the NN/LM Middle Atlantic Region (MAR).

In New York, for instance, Brooklyn Public Library (BPL) has received NN/LM funding to train staff on how to reach out to patrons who have health care information needs, such as teenagers and Spanish-speaking patrons, says Carrie Banks, supervising librarian of library services for children and youth with disabilities at BPL.

Additionally, in 2010 BPL’s Central Library participated in HealthCampNYC, a regional health “un-conference” that focused on using collective knowledge to improve health literacy and community health, according to Banks’s colleague, Lisa Chow, a web analyst with BPL.

Chow organized the unconference—a participant-driven event where the focus is on the collective knowledge of the group—which was funded by an NN/LM mini-grant for slightly less than $1,000. The event resulted in discussion and partnerships, such as BPL teaming with an organization to do technology training for seniors, including online health information.

NN/LM aims to improve access to reliable health information for the general public and health professionals and researchers who work directly with the public, says Lydia Collins, consumer health coordinator with NN/LM MAR. Programs use training on NLM resources and funding to encourage public libraries and other agencies to conduct health-related outreach directly in their communities, targeting the populations they feel would most benefit.

NN/LM courses focus on assessment and evaluation, consumer health, NLM databases, outreach and advocacy, and technology and systems, according to Collins. She adds that courses cover a wide array of topics, including the Affordable Care Act, and several that focus on veterans and military families, refugees and immigrants, seniors, and teenagers, all geared toward different types of libraries that serve varied populations.

North Pocono Public Library (NPPL) in Moscow, Pennsylvania, has participated in several health literacy initiatives. One focused on improving access to mental health information, which was found to be lacking in northeastern Pennsylvania, according to Susan Jeffery, NPPL director.

Funded by an NN/LM MAR award, a mental health resources workshop called “Out of the Shadows” was held in two Pennsylvania locations. The library partnered with the Commonwealth Medical College in Scranton to organize the program, which targeted all librarians in Pennsylvania to educate them about mental health issues that patrons may be experiencing and the resources they can offer to such patrons.

“The response was great,” Jeffery says. The workshop was so successful that leftover funding was used to hold a second workshop in April 2014 in central Pennsylvania.

Because the workshop was successful, NPPL is planning to participate in another NN/LM MAR project in which the library will offer a program called “Engage for Health” to help consumers learn how to effectively communicate with their doctors.

The program is being carried out through the Pennsylvania Library Association’s literacy initiative, PA Forward. Although the project is in its early stages, Jeffery says 20 libraries from throughout the state are already interested in participating.

“I think that’s an outcome in itself, that people want to learn more about how to implement successful health literacy programs, and they’re also very excited about the evaluation piece,” she says.

East Brunswick (N.J.) Public Library (EBPL), which serves a community of nearly 48,000 residents, has been running its “Just for the Health of It” health literacy initiative since 2009 to deliver equal access to trust-worthy health and wellness information, says Karen Parry, EBPL manager of information services.

The initiative features a proprietary health portal (wellinks.org) that Parry and her staff created, spurred by Parry’s personal experience of searching for health information about a type of cancer that her mother had.

The library improved the portal after NN/LM MAR awarded it $15,000 in 2010. The portal now receives more than 2,000 visits each month from librarians and the community alike to access health information available in seven languages: Arabic, English, Gujarati, Hindi, Korean, Mandarin, and Russian.

Last year, EBPL won two other awards from NN/LM MAR—$10,000 to redesign the health portal and $5,000 to market the newly redesigned health portal to the community. The library also received an NN/LM MAR award for $10,000 in 2012 to replace server equipment damaged by Hurricane Sandy.

Additionally, some of the librarians go twice a week into the community to set up a “Just for the Health of It” table to hand out brochures and answer health questions.

Parry also credits NN/LM MAR, of which her library has been a member since 2010, with offering her staff health literacy training opportunities. Five of the professional librarians at EBPL have become certified consumer health librarians through training provided by the Medical Library Association’s Consumer Health Information Specialization Program.

“I believe the training has given public librarians the knowledge of quality and accurate health information that’s available to them online, particularly the National Library of Medicine’s resources,” says Lisa Boyd, consumer health librarian with the NN/LM National Network Office in Bethesda, Maryland.

Training for librarians not only gives them the knowledge, it helps them evaluate what is good health information online.

Librarians field health information questions on a variety of topics, Boyd says. “But the climate of the day does kind of temper what people ask for.” For example, more people ask questions about health insurance because of the Affordable Care Act. Last year there was an uptick in questions related to the Ebola outbreak.

In terms of the impact such training has had on community health and health literacy, Boyd says the NN/LM National Network Office hopes that it “has provided people with knowing where to find good health information that they can understand, acquiring skills to find good health information, being able to communicate with their health care providers, and being knowledgeable about medical words and terminology and how the health care system works.”

Marilynn Lance-Robb, branch manager of Carvers Bay Branch Library and owner of MaFlo’s Hairstyles & Designs by Marilynn, both located in rural Georgetown, South Carolina, has been receiving grant funding from NN/LM SE/A almost continuously since 2006 to train people in the library and in her salon on how to use MedlinePlus.

Lance-Robb, who teaches basic computer classes at the library, says clients in her salon used to ask about health issues, and she printed out medical information at the library and brought it to them. She says her clients and their families are affected by a range of issues, including hypertension, diabetes, heart disease, breast cancer, prostate cancer, stroke, mental illness, amputation, kidney disease, teen pregnancy, sexually transmitted diseases, and addiction. However, after Lance-Robb applied for and won an NN/LM award, she added a computer to her salon and started training clients there, too, on how to search for health information about diet and exercise, minor aches and pains, or an illness or procedure they’re facing.

The training project, known as “MaFlo’s Health Awareness Team,” has made a tremendous impact, Lance-Robb says. Since Lance-Robb started receiving NN/LM funding, the team has held more than 200 sessions and trained an estimated 2,000 participants on how to use MedlinePlus. In the last year alone, the project conducted 24 sessions and trained 251 participants, according to a final project report for 2014–2015.

A number of options are available to libraries that want to increase health literacy in their communities or start programs locally through NN/LM.

Once they become network members, libraries can attend professional development opportunities, use NN/LM’s educational materials for their own trainings and events, and apply for funding opportunities at the regional level. Each region has its own funding cycles and types of awards, Collins says.

On a national scale, NLM offers up to $100,000 for Information Resources Grants to Reduce Health ­Disparities—projects that bring “useful health information to health disparity populations and the health care providers who care for those populations,” Eberle says.

In addition to its regional resources, NN/LM houses several national centers, such as the Outreach Evaluation Resource Center, which helps libraries plan and evaluate heath information outreach projects by offering professional development, publishing a blog, and providing free consultation to libraries interested in planning a project.

The NN/LM National Training Center offers e-learning and in-person classes for NLM resources, such as PubMed and TOXNET, that are geared toward librarians, health professionals, the public health workforce, and the public to make the most effective use of NLM resources.

LEA RADICK is a freelance writer based in Chicago. 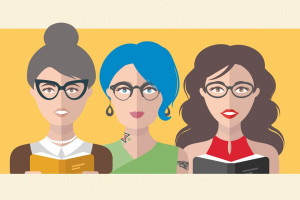 Our obsession with librarian representation