The Vancouver Island (B.C.) Regional Library, the Inner Mongolia Library in China, the National Library Board of Singapore, and the International School of Geneva, Switzerland, were honored with the ALA Presidential Citation for Innovative International Library Projects. The awards were presented by then–American Library Association (ALA) President Sari Feldman, with support from the International Relations Round Table Advisory Award Committee, at the 2016 ALA Annual Conference and Exhibition in Orlando, Florida.

The citation began as an initiative of Loriene Roy, 2007–2008 ALA president. Since its inception, 38 groups have been presented with the honor. The four 2016 winners were recognized for designing and implementing highly visible, innovative services that greatly improve existing library services for users. The projects draw attention to the potential of library service for creating positive change and demonstrate a likelihood for sustainability, with the potential to serve as a model for other libraries. 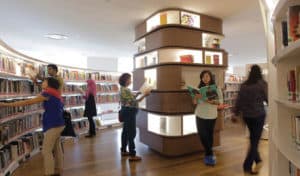 National Library Board of Singapore: library@orchard

The National Library Board (NLB) of Singapore partnered with Singapore Polytechnic to employ design thinking methodology to develop a public library in an unusual retail setting. To understand library users’ experiences and changing habits in the use of media and social spaces, they engaged them in the design process and used the insights to conceptualize the library.

The initial design of the library was informed by extensive interviews and observations of user behavior in libraries and other social spaces. Concepts were tested using prototypes, and the process allowed for several iterations and refinements, all informed by users. The extensive information-gathering process provided NLB with insights into the expectations and aspirations of today’s library users. Some of these insights are applicable not only to library@orchard but also to design considerations for future public libraries.

NLB found that users were drawn to the overall experience of the library, though the desired experience often differs from user to user. Users expressed a need to connect to information through a wide range of access nodes and behaviors. The library was thus designed to facilitate these connections at every opportunity. Users encounter current information at the entrance gallery. Patrons are encouraged to connect with other patrons in areas such as the makerspace, the arena, and book trees.

For more information and to nominate a project, visit ala.org/irrt/alapresintlibraryaward. The deadline for nominations is January 1, 2017.

Library@orchard is centered on lifestyle, design, and the applied arts, taking reference from its location in the prime shopping district, its unique design process, and its differentiated user base. As a public library, it espouses the theme “design is for everyone,” which is carried through the library in the design of the space and in features such as the video wall, digital interfaces, and printed materials. The way the collection is shelved and presented was also redesigned based on user insights.

Additionally, user insights led NLB to design and create immersive experiences for library visitors, including private “cocoons” and other quiet reading spaces. The library space seamlessly incorporates intuitive new technologies for users accustomed to interacting with digital devices and formats. At the same time, NLB was careful to balance what people wanted with what people needed so as not to end up with an unmanageable laundry list of requests. The guiding principle that NLB followed was to design a library that would allow people to use and explore content in the most intuitive way possible.

With its combination of designed spaces and user-centric experiences, library@orchard is aspirational and welcoming. It has been described as a library that has a “voice,” engaging visitors with subtle surprises and delight at every level. 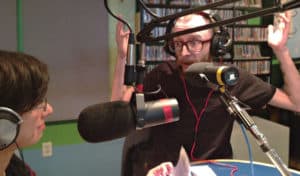 The Vancouver Island Regional Library (VIRL) partnered with the long-running CHLY 101.7 FM radio show Changes: The Show on Sustainability to create Librarians on the Radio, a show devoted to promoting library services to the wider Vancouver Island community. The show highlights librarians’ passions and interests and connects both library users and nonusers to the larger library world. Library users learn about things that they did not know the library is doing. Nonusers learn that the library is not just about books.

Librarians host the live show and interview their colleagues and peers. Mobile media kits allow library users to contribute and promote the show. Podcasts and an archive of past shows have been made available as well.

Librarians on the Radio went on the air in January 2013. It began as a 15-minute segment in another CHLY show before moving to a monthly hour-long slot during Changes. VIRL librarians Jason Kuffler and Justin Unrau host. Unrau developed nontraditional library skills while interning at the Canadian Broadcasting Corporation, and he uses these skills on the podcast.

He also presents Librarians Off the Radio, which offers content supplemental to the live show. VIRL’s e-librarian Emily Orr cohosts and focuses on digital literacy, and Adult Services Librarian Patrick Siebold contributes to the bookfight (competitive book reviewing) segment of the show.

Librarians on the Radio has gone beyond VIRL’s local service area to interview authors and librarians, such as Ferguson (Mo.) Public Library Director Scott Bonner, children’s author and illustrator Jeremy Tankard, and author Irvine Welsh (in a Freedom to Read Week special). Podcast downloads have increased as the show has taken on topics relevant to listeners outside of Vancouver. 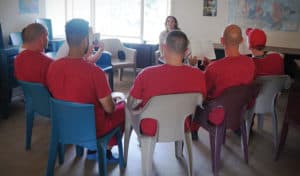 In April 2015, VIRL partnered with the Nanaimo (B.C.) Correctional Centre, a medium-security prison. Initiated by VIRL Librarian Jennifer Seper, the partnership began with a simple plan to improve the existing library at the facility and grew to include a book club and an agreement, still pending, that would allow inmates to request specific materials directly from the library.

Seper approached Nanaimo to increase both inmate access to materials and literacy levels. The facility has a small school, but because of recent cutbacks, there is only one teacher and limited access for inmates.

The first component of the project was to overhaul an outdated library collection and reorganize materials to allow prisoners to quickly select quality, appealing titles. Once Seper had solicited more than 50 boxes of donated books, she weeded the facility’s collection, working with a team of four inmates to recycle thousands of torn, dusty, outdated titles. The remaining books were sorted and reshelved with the new titles.

During weeding and reshelving, Seper was approached by inmates with requests for specific titles or topics. Many expressed a desire to read but were not able to find materials that interested them. These conversations led to a lending agreement between the facility and the library that would allow inmates to request titles or books on an area of interest that could be brought into the facility on a monthly basis. A library card would be issued in the name of the facility, but the inmates would be responsible for ensuring the materials were returned in good condition. An agreement was drafted, including the request forms, and is pending.

Books and reading were natural conversation topics during the weeding process, and everyone seemed eager to discuss their favorite book or those they had read as children. Inspired by this, Seper began to hold monthly meetings for inmates in the Guthrie Therapeutic Community Program, where inmates learn to discuss their feelings and opinions with others and learn to accept different opinions in a nonconfrontational way. Book clubs for the general population and protective custody populations of the center are being considered. 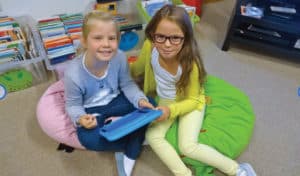 Marronniers Library is a primary school library belonging to the International School of Geneva, Switzerland. The primary school has 580 students, ages 3–9, from countries all over the world. Teaching is provided in both English and French. The library is staffed by Head Librarian Marie-Pierre Preece and librarian Susan Boller, who teach 20 classes per week, provide resources to teachers, lend books to parents, and organize various library events.

Boller’s idea to create an app for the library took root approximately four years ago as mobile devices became ubiquitous. Most students at the school have a tablet or access to one at home. Parents often asked the school’s librarians for advice on where to find safe and educational apps, convincing Boller that the library needed to have its own app.

Creating the app was a long and challenging process given the library’s tight budget and Boller’s lack of IT experience, but she succeeded in creating an app using existing technology at low cost. Launched in spring 2013, it has greatly enhanced the delivery of library services and is now widely used by students, parents, and teachers. It is free for users and available on iPad, iPhone, and Android devices. Recent statistics show the app has been downloaded on more than 900 devices, and an internal survey showed approximately 80% of patrons use the app regularly.

Key app features include the following:

Preece and Boller had one more idea: Although the app was designed to be used on mobile devices, they wanted to find a way to wean children off these devices and into print books. Boller came up with the idea of putting QR codes on books that would link to short video teasers enticing the children to read the books. The experiment was a success: After scanning the QR code via the app, more often than not the child put the device down and opened the book. 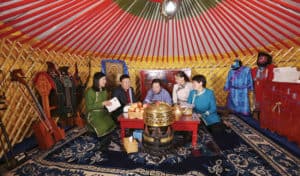 The Inner Mongolia Library launched the Cloud Service Project in 2014 with two goals in mind: partner with local bookstores to strengthen demand-driven acquisition and increase the use of the library collection to promote reading. It has proven to be an innovative solution to a continued decline in public borrowing and user complaints about the unavailability of newly published books or high-demand items.

The Cloud Service Project uses dynamic and shared data to allow patrons to borrow books directly from participating bookstores and return them to the library. The library staff then completes the ordering process and stores the books in its own collection. The project has built a strong partnership between libraries, bookstores, and readers. Both bookstore and library patrons have access to library book recommendations through the service. Patrons can exchange borrowed books with other patrons through the mobile app’s book exchange platform.

The end result: More library patrons are visiting bookstores, and more bookstore patrons are visiting the library. It has also realized the library’s three-zero mantra: zero wait, zero patrons leaving without a book, and zero complaints. Furthermore, the project has achieved a 100% circulation rate for books newly acquired through the project. The Inner Mongolia Library has also shown dramatic improvement in core measures for library service, such as target population coverage rate, number of library cardholders, and gate count. 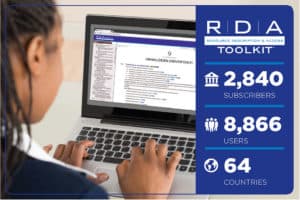 Is RDA a Global Standard?

Usage, translation, and governance as indicators 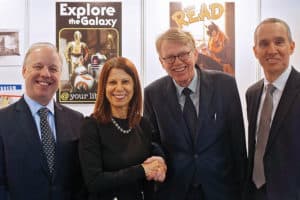 ALA and Germany Unite

A three-year partnership begins in Leipzig