This year we took a closer look at the population density of the communities that placed library referenda before the voters. The Institute of Museum and Library Services groups the nation’s 17,566 library outlets into four geographic locales: cities, suburbs, towns, and rural areas. While all public libraries strive to transform communities through innovative programs and quality collections, the locale often defines unique needs. Libraries in more populated areas may have longer wait times for computer use. Libraries in less populated areas, including many rural areas, provide less access to technology and less formal digital literacy training because of fewer staff members and inadequate broadband access. At the same time, rural libraries provide invaluable informal training and may be one of the few places left to offer the use of computers and internet without fees. 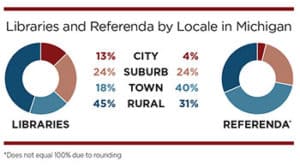 The most successful referenda in Michigan were renewed and new levies in support of library operations. Herrick District Library in Holland is classed as a city locale and serves a population of 102,423 across the counties of Allegan and Ottawa. Voters were asked to restore a levy of 1.5 mills for 14 years (2017–2030). The tax will provide about $5.2 million in revenue each year. Homeowners will pay about $112 annually on a home valued at $150,000. The levy passed by a wide margin of 86%, with 14,557 votes for and 2,388 votes against. Herrick could have been forced to close within a year without the levy.

The Muskegon Area District Library (MADL), a suburban locale, encompasses 10 community libraries and one Library for the Blind and Physically Handicapped. MADL serves about 119,450 people across most of Muskegon County. Voters were asked to support a 0.5-mill increase in the current tax, from 0.75 to 1.25 mills, for 10 years through 2026. Property owners will pay $64.50 a year on a $100,000 home compared to the previous $37.45 per year. The levy passed with 54% of the 18,256 voters saying yes. The library had earlier conducted a survey showing that the highest-valued services include early childhood programs, the Library for the Blind and Physically Handicapped, and lifelong-learning services. These programs will be favored in years to come.

The Holly Township Library, a town locale, is in northern Oakland County and has a total service area of 36.6 square miles, which includes 23,088 people in the village of Holly, Groveland Township, and Rose Township. Voters approved a renewal of 1 mill for five years. The measure passed with 1,005 (78%) yes votes and 290 (22%) no votes. The library holds 44,461 volumes and circulates 75,102 items per year.

Montmorency County, a rural locale, has a population of 9,765 within its 563 square miles. Montmorency County Public Libraries has three branches in Lewiston, Hillman, and Atlanta. Voters approved an increase of 0.6 mill to replace a millage that expired. The results included 2,176 (63%) yes votes and 1,260 (37%) no votes. The tax will bring in $388,190 annually.

KATHY ROSA is director of ALA’s Office for Research and Statistics (ORS), which provides leadership and expert advice to ALA staff, members, and the public on all matters related to research and statistics about libraries and librarians. KELSEY HENKE is a program officer in ORS. 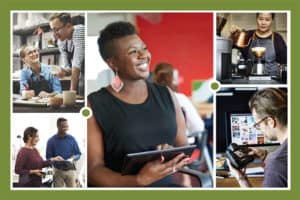 Taking your library into the business world 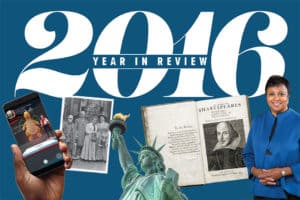