Be inspired by the mothers of science. For Ada Lovelace Day in 2016, the libraries at Massachusetts Institute of Technology presented some holdings from the rare books collection by the founding mothers of the STEM fields. For youth who may not be interested in old books, have them conduct experiments at a “Mad Science” party. Highlight titles about Marie Curie and Rachel Carson that kids can check out as free party favors.

Netflix and chat. In 2014, the Los Angeles Public Library hosted a movie night and screened Feminist: Stories from Women’s Liberation, with director Jennifer Lee. Show a similar film (Miss Representation, Girl Rising) and pass the popcorn during a discussion afterward.

Meet in the clubhouse. The Mt. Pleasant branch of the D.C. Public Library invited area teens to come to a specially themed meeting of its book club in 2014. Students were asked to bring a book about women’s history and share their thoughts in a friendly chat. Consider opening a book group to all ages, or hosting a reading circle for moms who discuss parenting memoirs.

Host an open mic. Let the success of live-lit events like The Moth encourage the women and girls who visit your stacks to tell their stories. Hook up a sound system and invite community members to perform their poetry, fiction, and essays.

Paint a rainbow with books. Make a display in your space featuring books authored by women of color, or that feature minority characters. Join forces with Olaronke Akinmowo, who founded the Free Black Women’s Library, and Marley Dias, who set out to collect 1,000 books with black female protagonists. Both Dias and Akinmowo donate the books they collect to introduce African Americans voices to readers around the country.

Explore identity. Build a display of the popular Who Was? books, highlighting famous women such as Amelia Earhart, Rosa Parks, and Eleanor Roosevelt. Lead an activity session in which youth are asked to write miniature versions of their own Who Is? book. Guide them in describing themselves, listing proud achievements, and identifying goals they have. Premake paper booklets and encourage kids to attach a picture of themselves on the cover.

Tap into your local writers’ guild. Post a call for budding journalists to write reviews of their favorite books by and about influential women, and feature them on your library’s website. The sky’s the limit with this one: The elementary crowd could tell you why they love the Fancy Nancy series, teens could report on Malala Yousafzai’s effect on their lives, and their female mentors can chime in about what they thought of Tina Fey’s Bossypants.

Decorate your space. Cover your walls in images of Georgia O’Keefe’s evocative flowers or Faith Ringgold’s narrative quilts during March. Offer women and girls in the community a chance to display their original pieces throughout the month, and have patrons judge their favorite for a literary or artistic prize.

Say Yes to displays—and women in film and TV. Create a book display featuring the written work of some of Hollywood’s hottest creators. Put on a reading hour, sharing excerpts from Shonda Rhimes’s Year of Yes (Simon and Schuster, 2015) or Mindy Kaling’s Is Everyone Hanging Out Without Me? (And Other Concerns) (Three Rivers Press, 2012).

Broadcast the history women are making today. It’s never too early—or late—to develop interviewing skills. Assemble your future Christiane Amanpours and have them talk to patrons about influential women in your community. San Diego State University did this in 2016 and posted the videos on their website. Doing so informed students about Women’s History Month and helped them reflect on women who are meaningful to them.

Mark 30 years on the calendar. This year marks the 30th anniversary of women’s history being celebrated nationwide for the month of March. To honor these most recent years in women’s history, construct an oversized wall calendar. Starting on March 1, add words and photographs to chronicle notable strides made for and by women in 1987. On March 2, walk your way through 1988, and so on, counting your way through the years. Ask community members to add their own experiences to the calendar (the birth of a daughter, the year a sister got a master’s degree). On March 31, ask people to write or draw what they’d like to see in coming years regarding women’s rights and achievements.

Make history with your imagination. Maybe your library doesn’t own Makey Makey kits or have an official space for crafting, but it is full of creative brainpower. Invite community kids to make crafts that celebrate famous women. Preprint images of famous women to be turned into paper bag puppets. Out-of-circulation magazines are great for creating collages, illustrating what it means to be a girl or woman. Finish things up with a puppet show or have participants explain the items in their collages.

Build a riveting photo booth. All you need is a digital camera and a simple backdrop or blank wall for this one, plus a few items from the dollar store or the back of your closet. Fill a chest with red Rosie the Riveter bandanas, Amelia Earhart aviator goggles, and the big glasses and lace collars of Ruth Bader Ginsburg, and let the dressing up begin! Get the word out that people can bring their own items—sports equipment, musical instruments—to the photo booth, too. Ask your willing models to share the photos they snap on your library’s social media accounts, using a special Women’s History Month hashtag.

March through the stacks. Lead a march around the library. Plant READ posters along the way, and stop to discuss the women featured in them. Show your crowd where to find biographies of Helen Keller, Anne Frank, Rita Moreno, and Lady Gaga. Polish things off by sharing some fun facts about female authors in your collection—are J. K. Rowling’s books the most commonly checked out? How many library card holders are female? Digging up trivia should be fun, as you’re likely to learn something new yourself.

Engage an inspiring local speaker. The Malibu (Calif.) Library got ahead of the game by having famous civil rights attorney Gloria Allred speak on February 15. Follow its lead by asking accomplished women in your area to share highlights from their careers and lives—professors, city council members, writers, and medical professionals.

Honor sisterhood, then and now. In 2014, Kansas City (Mo.) Public Library explored the history of the Athenaeum, the city’s oldest women’s club, founded in 1894. The library found and organized old meeting minutes and photographs to share with the community. Invite local women’s groups, from unofficial book clubs to chapters of the Red Hat Society, to mingle. Ask sororities at the nearest college to talk about what sisterhood means to them.

Present a snapshot of women’s history. Harvard University’s Schlesinger Library, which documents US women’s history, opened an exhibit in November 2016 featuring photographs from the women’s liberation movement; the exhibit will conclude during Women’s History Month. Display photos from your own collection, and leave space for patrons to post photos of women who they call heroes.

Give a nod to fictional females. No doubt Sally Ride and Serena Williams have inspired countless women and girls, but we’d be in denial if we said Jo March hasn’t had an impact as well. Fill a bulletin board with images of Ramona, Matilda, Judy Moody, and Katniss, and have others print off pictures or create their own renderings of literary heroines to add to the fun.

BAILEY BREWER is a freelancer writer based in California. 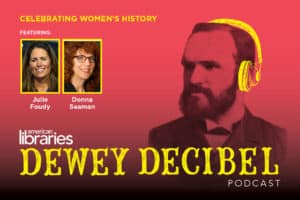 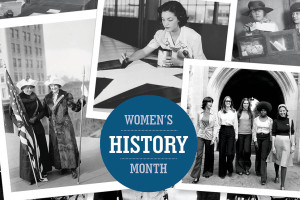