The Librarian’s Guide to Homelessness

Advice for managers and leaders

It was 3 a.m. A woman struggling to carry her three children—a newborn and twin toddlers in car seats—shuffled along an urban bicycle trail during the first thunderstorm of the season. Her days-old C-section incision was infected. Every flash of lightning must have thrown ghastly shadows. Every thunderclap and gust of wind probably made her feel like even the elements were conspiring against her.

Can you imagine what this would feel like? My imagination is unable to conjure such raw terror.

Somehow, the police found her and her children and drove them to Hesed House in Aurora, Illinois—the second largest homeless shelter in the state and the largest outside of Chicago.

I am executive director of Hesed House, but I wasn’t there. That night—like every other night—there was only one staff person on duty. He was responsible for 200–250 individuals scattered throughout the 45,000-square-foot building. It is likely that he would never have a five-minute period in his life when he had a greater opportunity to impact another person’s life.

He immediately got the woman a warm meal even though the kitchen was closed. He prevented a dozen women on their way to work from taking a shower so she could bathe in peace. He left the building completely unattended while he rummaged through a trailer in the parking lot looking for dry clothes that would fit her. He put her in an empty dorm room in our transitional wing, a direct violation of federal grant guidelines.

Before the sun had risen the next morning, this staff member had broken at least a dozen organizational rules. I have never been more proud.

I have spent the entirety of my career learning—and teaching—the art of “practical compassion.” It is the key to changing the world. If we have compassion for the most vulnerable but are too afraid of them to have a conversation with them, our compassion isn’t worth much. The revolution is in the relationship. Sometimes, though, the relationship requires a little effort and understanding and a few practical skills.

It is easier to help a timid staff member become assertive than it is to help an aggressive staff member be polite. I am not sure why this is, but hot-headed employees usually cannot rein it in for very long. They can get better for a little while, but eventually emotions take over and they lose their cool. Timid staff, on the other hand, grow only more confident as they get experience.

There are some tactics that can make you more effective.

The minimalist. Less is more when it comes to rules. If you have four basic rules, it is easy for everyone (patrons, staff, and management) to learn them and remember them. If you have 106 rules that govern every specific behavior imaginable, patrons will have trouble remembering them and staffers will have trouble enforcing them (which makes you look arbitrary).

At Hesed House we have four rules posted on a big yellow metal sign outside of the shelter entrance:

Every staff member—and most residents—can recite them from memory. There is no ambiguity. Consider what some of your fellow libraries are doing:

The red and the blue. There are two types of rules:

Some people view the red and blue rules concept as ludicrous. To them, a rule is a rule; if it is going to be ignored, it shouldn’t be a rule. The problem with this thinking is that it is impossible to develop guidelines and rules for every possible scenario. It is much more effective to make a few hard-and-fast rules and then a bunch of guidelines that work in most, but not all, situations.

For example, Hesed House has a rule that residents are not allowed to arrive later than 10 p.m. It is a blue rule. If someone shows up at 10:30 p.m. during a blizzard, I expect staffers to ignore the rule. If they don’t, someone could literally die. We have another rule that violence is not permitted. If one resident punches another resident, staffers do not have the authority to send the aggressor off to bed with a firm scolding. This is a red rule. The puncher is expelled.

The problem for managers is that it is obvious to us which rules are red and which are blue. It is not obvious to front-line employees (especially new ones). Make sure staffers know the difference.

The anti–witch hunt. In February 1692, two children in Salem, Massachusetts, began to convulse on the ground. They described feeling poked by imaginary pins. Soon, other young people in the village complained of the same thing. The culprits were soon identified: Sarah Good, a mentally disturbed homeless woman, and others accused of witchcraft. On July 19, 1692, Good was executed. Before the panic had subsided, 25 people were dead.

It is no coincidence that the Salem witch trials began with a homeless woman. The most vulnerable among us are often scapegoated during periods of mass hysteria. The same thing happens today to immigrants, minorities, or—as is often the case—homeless individuals.

Guard against panic in your library. It is contagious. After something bad happens in your community (or in the news), people become unreasonably fearful. Suddenly they are terrified of something that has the same statistical likelihood as being eaten by a shark.

Our irrational fears can sound so reasonable in the moment. A registered sex offender just got a library card, so now all children will be kidnapped. A patron was overheard having a conversation with himself, so now Norman Bates is on the loose. A Wiccan group from the local college applied to use a conference room, and now we are afraid that our pets will disappear for ritual sacrifices. A mosque opens in a nearby town, and we all Google the word jihad. A coworker is mugged leaving a nearby restaurant, and we devise new ways to exclude homeless patrons.

Here is how you deal with mass hysteria and witch hunts that seize hold of your staff:

The Andy Taylor. Have you ever watched The Andy Griffith Show? The main character is Sheriff Andy Taylor. He is a great officer who doesn’t just run around arresting people. He is a true problem solver, always working with people to make the community better.

Your library needs a Sheriff Andy Taylor. Put another way, your library needs a liaison within the police department. It isn’t enough to just call 911 when you have an issue. You also want an officer or two who looks out for you.

Your first choice should always be the community-oriented policing (COP) officer assigned to your area. COP officers are trained to build relationships and proactively solve problems through community engagement. Your local COP officer wants to know you. The type of people who are chosen to go into these units are usually very friendly and enjoy working collaboratively.

If your jurisdiction does not have a COP unit, then you’ll have to move to Plan B. Call the police commander who is responsible for your area and explicitly ask if there is a good person who can be your contact within the police department.

The commander will know which of his or her officers would be a good fit and will usually assign someone accordingly. Also, the officer will feel more pressure to serve you well if he or she has been assigned by a boss. This is a much better tactic than trying to simply befriend a random officer.

One final tip about getting a police liaison: Unfortunately (for you), the best police officers get promoted quickly. If you find a good officer and he or she gets promoted, ask for an introduction from that person to someone else who can be your main contact. You are more likely to get introduced to an equally good officer.

The lawyer-repellent spray. It is important for libraries to protect everyone’s access to them. Sometimes when you fail, lawyers and courts intervene. Some examples include:

Kreimer v. Morristown (1991): Richard Kreimer, a 42-year-old homeless man, was a problem patron for the Morristown (N.J) library. He was kicked out repeatedly for staring at patrons, following patrons around, speaking loudly and belligerently, and smelling very bad.

The library lost the case at the trial court, with the judge saying, “If we wish to shield our eyes and noses from the homeless, we should revoke their condition, not their library cards.” The appellate court overturned the trial court, ruling in favor of the library—but not before the library’s insurance company had settled for $80,000.

Armstrong v. District of Columbia Public Library (2001): Richard Armstrong tried to enter Martin Luther King Jr. Memorial Library in Washington, D.C., one February afternoon. A security guard stopped him, saying that he needed to “clean up” before he could come in. Ultimately, the court held that the library’s policy against “objectionable appearance” was unconstitutional because it was too vague.

I won’t go in depth into the liability from homeless patrons, but I will share an acronym (FEND) from lawyer-librarian Mary Minow for keeping lawyers away:

Predicament: A nonhomeless patron is complaining

“This is ridiculous,” a man blurts out as he shuffles toward you. “I pay taxes, and I can’t even use the library. It is completely overrun with the homeless. You need to get them out of here. If you can’t fix this, I’m calling the mayor!” It wasn’t a question, but he stares at you, waiting for an answer anyway. What do you do?

Listen without agreeing or disagreeing. I quietly listen until they get bored and move on. It is easier than fighting and usually more effective. Most people eventually realize (without being told) that they are being ridiculous. When you challenge them, though, they dig into their position even stronger. It might make you feel good to defend homeless people, but it doesn’t actually change the person’s mind.

Here are a few phrases that work well:

It is hard to be a manager or leader on a good day. On a bad day—when staffers are freaking out and the community is making threats—leadership seems downright impossible. To steal a line from the poem “If—” by Rudyard Kipling: “If you can keep your head when all about you / Are losing theirs and blaming it on you,” then you just might be able to have a huge impact on the community. This world desperately needs your leadership. Teach your staff empathy. Teach your staff empathy-driven enforcement. Help the community to have a greater appreciation for the most vulnerable members.

Ryan J. Dowd will be appearing at the 2018 ALA Annual Conference and Exhibition in New Orleans for the session “Homelessness and Libraries: An Empathy-Driven Approach.” He will also be moderating three screenings of The Public with writer/director Emilio Estevez. Check the Annual Scheduler for details.

RYAN J. DOWD is executive director of Hesed House in Aurora, Illinois. He trains organizations around the globe on how to use empathy-driven enforcement with homeless individuals. He is a licensed attorney and has a master’s in public administration. 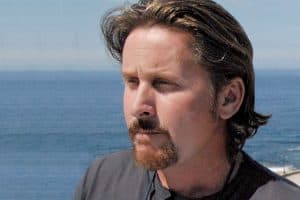 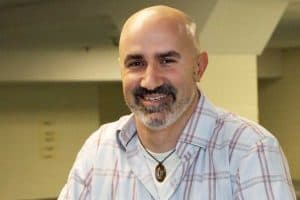 A discussion about providing services to homeless patrons