As communities and institutions around the world raise rainbow flags and march in parades this month, two New York City libraries are homing in on a rich slice of local history: the police raids and subsequent riots that began June 28 at the Stonewall Inn, a gay bar in Lower Manhattan, 50 years ago. New exhibits at New York Public Library (NYPL) and New York University (NYU) Special Collections link the historical event to the broader cultural movements that fueled it and were fueled by it.

“Love and Resistance: Stonewall 50,” through July 13

“Many people think of Stonewall as the start of the LGBTQ activist movement,” says Jason Baumann, assistant director for collection development at NYPL and coordinator of the library’s LGBTQ initiative, who curated the exhibit. “We wanted to show how it was actually a turning point. From the 1950s on, there was a small but pioneering political vanguard; Stonewall was the moment when this blossomed into a mass movement.”

“Love and Resistance” was built around the work of Kay Tobin Lahusen and Diana Davies, two photojournalists who documented the era’s pivotal events and whose archives are held by the library, alongside periodicals and other ephemera from its LGBTQ and activist collections.

Baumann also highlights materials related to transgender and gender nonconforming activists, such as writer Virginia Prince, who edited the independent Transvestia magazine in the 1960s, and drag queen Lee Brewster, founder of the Queens Liberation Front, an influential advocacy group in the 1970s. “Many people may think that transgender activism is something recent, when in fact it has a much longer and important history,” he says.

NYPL has planned more than 50 public programs around the anniversary and produced complementary books and research guides.

“Libraries and archives have a key role in preserving LGBTQ history and making it available, because it is not often taught in schools,” Baumann says. “It is essential that LGBTQ youth, as well as the larger society, know that they have a history, and that they can make a difference.”

“Violet Holdings: Highlights from the NYU Special Collections,” through Dec. 31.

Just a few blocks from the site of the riots, NYU is marking the anniversary with an exhibit spanning a century and a half of local queer and activist history, one of several Stonewall-themed events across the university. The oldest materials, drawn from the personal archives of actor and suffragist Elizabeth Robins, date to the late 1800s. Among the more contemporary figures featured in the exhibit are Avram Finkelstein, designer of iconic posters that raised awareness of the AIDS crisis, and Larry Levan, the legendary disco DJ. Another entry—a 1970 photograph of NYU students protesting alongside activist Marsha P. Johnson, who was present at Stonewall the night of the raids—highlights NYU’s history of student activism.

NYU Special Collections brought in curator Hugh Ryan, an archivist and author of When Brooklyn Was Queer, to design an exhibit that would illuminate the movement through individual narratives and personal archives. He describes the challenges of navigating queer history and representing diverse voices.

“When you’re working with limited time and budgets, you get all these compromises that no one wants to make—particularly around diversity—but at a certain point you can’t keep searching,” he says. That’s a pernicious way in which these systematic erasures that already exist in the archive—of people of color, of queer people, of low-income people, of women—get reproduced, because we don’t put in the work now to undo the collection issues of 10 years ago or 100 years ago.”

He encourages librarians to evaluate and update their institution’s finding aids and usage policies around queer materials: “What terms were we using in 1970? Have we made materials inaccessible to researchers for reasons that don’t make sense anymore?” Asking these questions, he says, is “small-scale, subtle activism, but it makes a real difference to the people who are coming and looking at the materials.” 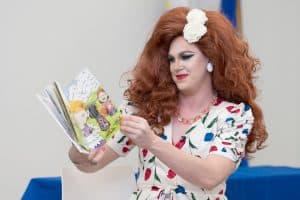 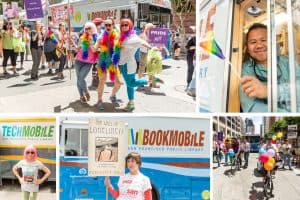 ALA at the San Francisco Pride Parade