Can My Library Ban Guns?

Letters of the Law is a new online column exploring a wide range of legal issues that arise in libraries, from a pair of leading authorities: Mary Minow, a librarian who became a lawyer, and Tomas A. Lipinski, a lawyer who became a librarian. Together they have authored four books on the subject, including The Library’s Legal Answer Book (ALA Editions, 2003, with a new edition forthcoming in 2021), and led forums at American Library Association (ALA) conferences in collaboration with the Public Library Association (PLA).

Few librarians enter the profession expecting to confront life-or-death situations in the workplace. But as the parallel epidemics of opioid abuse and gun violence touch nearly every community in this country and strain health systems, law enforcement, and, increasingly, public libraries, library professionals may find themselves taking on unexpected roles.

Mary Minow weighs in on the liabilities and protections around administering Narcan and restricting guns in libraries. Look for a new column by Lipinski in December. Send questions or topics you’d like to hear about to Associate Editor Sallyann Price at sprice@ala.org.

Do library employees or volunteers face liability if they administer Narcan to a patron who appears to have overdosed on opiates?

The good news is that individual staff members and volunteers should be well covered under state Good Samaritan laws. State laws vary in their details but all protect good-faith efforts by individuals who come to another’s aid, even if they make reasonable mistakes. These laws kick in when nonprofessional rescuers are in a situation of imminent peril. Although consent is generally required, it is not expected if physically impossible. Once a rescue has begun, however, the individual typically has an obligation to remain until help arrives or until giving aid becomes unsafe.

Good Samaritan laws have been enhanced in most states over the past five years to specifically protect private citizens who administer overdose reversal medication. It has become easier for nonmedical personnel to get access to reversal drugs without a prescription, and drug users are generally shielded from prosecution when seeking help for a companion who has overdosed.

Depending on the state, however, the library as an entity may not be considered an individual protected under that state’s Good Samaritan law and may therefore not be protected by it. This year the Michigan Library Association, the Library of Michigan, and the Michigan Department of Education successfully advocated for libraries to be granted the same immunity as public schools and first responders. Other states wishing to follow suit should take a close look at the Michigan law.

“The prior Naloxone laws required each government entity to obtain a separate law to receive the ability to obtain Narcan and receive the liability protections,” says Library of Michigan Legal Consultant Clare Donnelly Membiela. “The new law rewrote the Narcan policy to include government entities. Without the amendment, public libraries risked exposure to liability as an entity and were unable to acquire Narcan in the name of the public library. This gap in the law hindered Michigan public libraries trying to implement institutional Narcan policies and procedures. With the new legislation, public libraries can now move ahead with Narcan trainings and policies without worrying about liability.”

Public libraries should research their own state laws and consider working with library legislative committees to petition for extending existing legislation that may protect schools and other institutions. It’s as simple as inserting the words “and libraries” in the laws. Public libraries can also avail themselves of PLA and OCLC resources through the Public Libraries Respond to the Opioid Crisis with Their Communities project.

May my public library ban guns on its premises?

It depends on your state law but increasingly, the answer is no.

In 2012, a state appellate court ruled against a district library in Michigan that banned guns on its premises. The court wrote that state law overrode the library’s policy. Michigan state law bans firearms, both concealed and unconcealed, on the premises of schools, churches, courts, daycare centers, and a few other locations, but it does not ban them on library premises. Further, localities in Michigan (and many other states, see below) do not have the authority to issue their own bans.

The diversity of state gun laws means each library must be sure to read its own state law when reviewing its policy concerning firearms. To help you understand your state law and its application for libraries, look closely at the state provisions for open carry (especially exceptions to them) and for preemption (that is, whether the state law trumps any library-set rules).

A helpful survey for libraries compiled by Diana Gleason in 2015 found that at least 28 states at that time did not allow public libraries to ban guns. The survey also showed that 44 states preempted local governments (as in Michigan) but, in an important twist, 21 of these states had some wiggle room—that is, they offered some exceptions to the state preemption. The devil is in the details; some allowed local ordinances that banned guns in public buildings, or ordinances that predated the state law. Gleason found that seven states did not preempt local government, meaning the municipality and perhaps even the library could set its own rules.

At least one state library association has successfully amended its state law to give public libraries local control over bans. In 2017, Missouri became the 11th state to pass “constitutional carry,” a policy that allows residents to carry a firearm openly or concealed without advanced training, law enforcement background checks, or permits. The Missouri Library Association (MLA) responded by stating:

“MLA will continue to monitor legislative action under Missouri Revised Statutes Section 571.107.1 in the list of premises onto which no person may carry concealed firearms, even with a concealed carry permit. The goal is to get public libraries included on the list of entities that can restrict firearms. The list currently includes schools, and like schools, libraries are where thousands of children and teens come every day for homework help, research, and entertainment. For that reason, MLA feels public libraries should be added to the list.”

Gun laws are frequently expanded and contracted because active pro- and anti-gun lobbies, so keeping up with state laws can be a challenge. The Giffords Law Center to Prevent Gun Violence is a detailed and up-to-date resource. To determine whether municipalities (and municipal libraries) can ban guns locally, look under its section on “location restrictions.” The National Rifle Association Institute for Legislative Action is a resource for current information from the pro-gun lobby.

Additional considerations and resources for libraries dealing with gun issues include:

The information in this column does not constitute legal advice, nor does it necessarily reflect the views of ALA or PLA. It is meant to serve as a starting point for librarians and library lawyers who wish to research the law and consider its applications. Different jurisdictions will have different laws and may even apply the same laws differently. If you require legal advice or expert assistance, we urge you to seek out the services of a competent legal professional.

MARY MINOW is a consultant with LibraryLaw.com. She has worked as an attorney, public library branch manager, and online database consultant. She has taught as adjunct professor of library law at San Jose State University’s School of Library and Information Science. 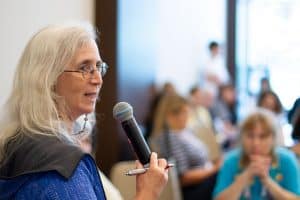