Is My Library Liable for Fake News?

Our online column Letters of the Law explores a wide range of legal issues that arise in libraries, with the help of a pair of leading authorities: Mary Minow, a librarian who became a lawyer, and Tomas A. Lipinski, a lawyer who became a librarian. Together they have authored four books on the subject, including The Library’s Legal Answer Book (ALA Editions, 2003, with a new edition forthcoming in 2021), and led forums at American Library Association (ALA) conferences in collaboration with the Public Library Association (PLA).

Libraries across the country are busy preparing for the 2020 election. The special report “Democracy in Action” in our November/December issue offers strategies and resources for advocacy, civil discourse, and media literacy. In his debut as columnist, Tomas A. Lipinski weighs in on legal considerations around election-related issues ranging from fake news to meeting room policy.

Read the first column here. Look for a new column by Minow in February 2020. Send questions or ideas to Associate Editor Sallyann Price at sprice@ala.org.

With 2020 elections looming, politically skewed misinformation is sure to keep flooding our media channels. Is there any way to regulate or ban false or misleading content on library premises?

Legal regulation of fake news in public spaces is difficult, if not impossible. As long as the speech is not defamatory—meaning that it doesn’t harm someone else’s reputation—“the right to lie” is constitutionally protected as free speech. Official filings are an obvious exception: You cannot lie on your tax return, on a mortgage loan application, or when under oath or otherwise making legal declarations subject to penalty of perjury.

The federal Stolen Valor Act of 2005 made it a crime to falsely represent oneself as having been awarded military medals or decorations, and the act’s trajectory holds a lesson for fake news. Courts evaluate this type of restriction on free speech with a test known as “strict scrutiny”: The restriction must serve a compelling state interest and be narrowly tailored to accomplish that interest. There must also be no less restrictive means of accomplishing that interest (in this case, exposing those falsely claiming to have earned military honors). In the 2012 US Supreme Court case that overturned the Stolen Valor Act (United States v. Alvarez), the high court found that less restrictive means of verifying and exposing such claims existed, so the speech would remain permissible, if not ethical or tasteful.

In theory, the proper response to free speech that takes the form of false claims is more speech—that is, more open exchange in a free marketplace of speech (sometimes referred to as “counterspeech”). “The government has not shown, and cannot show, why counterspeech would not suffice to achieve its interest,” the court acknowledged in the Alvarez case. “The facts of this case indicate that the dynamics of free speech, of counterspeech, of refutation, can overcome the lie.”

Libraries can take a cue from the Alvarez case and offer counterspeech of their own in the form of library programming and materials that help patrons discern truthful news from fake news. (American Libraries has resources for promoting media literacy and using technology to fight misinformation.)

Political groups often request the use of public meeting rooms in libraries. Must libraries allow these groups to use the rooms for advocacy and campaigning?

A public library can exclude certain activities from its meeting rooms—if those activities are deemed inconsistent with the nature of the space. For example, the Ninth Circuit of the US Court of Appeals has commented that a library can prohibit a school from using a library meeting room as a regular part of school curriculum, on the grounds that doing so would “transform the character of the forum from a community meeting room to a public school” (Faith Center Church Evangelistic Ministries v. Glover, 2006). The court applied this logic to justify excluding a religious group from the meeting room, so that it would not be transformed into “an occasional house of worship.”

In constitutional terms, a public library meeting room is a “limited public forum.” That means any restriction on who can use the room must be narrowly tailored to serve a significant government interest and ample alternatives must be available. Furthermore, the exclusions must be reasonable.

Courts rarely discuss political campaign speech exclusions in this context. However, one unpublished case noted a library’s meeting room policy exclusions “for commercial, religious, or political campaign meetings” (Citizens for Community Values Inc. v. Upper Arlington Public Library Board of Trustees, 2008). In that case, the exclusion was acceptable because it was “relatively narrow, covering only a small subcategory of political speech,” according to the US District Court for Southern Ohio.

The case law suggests that public library meeting rooms are not appropriate places for campaign rallies or election-night headquarters. Short of those examples, it would be difficult to prohibit a group from using the space on the basis of political or religious affiliation. Regulated speech in a limited public forum must also be viewpoint-neutral. Limiting use to one political party or group over another is constitutionally impermissible discrimination.

Is a library liable if a patron posts fake news or commentary that is defamatory or harmful on its social media platforms, or on the comments section of its online catalog?

Entities are generally protected from liability for third-party social media posts by Section 230 of the Communications Decency Act of 1996. Per the statute, “no provider or user of an interactive computer service shall be treated as the publisher or speaker of any information provided by another information content provider,” such as a blog or news site. If the speech originates from a third party, in a context intended for online distribution, the library may look to Section 230 for protection from civil liability. The statute provides immunity from civil litigation when an internet service provider is acting in its traditional role as a publisher of third-party content. (It does not provide immunity from criminal prosecution relating to obscenity, sex trafficking, sexual exploitation of children, intellectual property infringement, or violations of the Electronic Communications Privacy Act of 1986, which protects records of electronic communications.)

One notable exception: private email not intended for publication, per Batzel v. Smith (2003). Other types of email communication may be protected, however. If a message comes through a virtual email reference service, for example, in a context where such queries are intended to be posted and responses shared for others to view, the immunity applies, just as it does for patron posts and comments on social media or other public platforms.

In Kathleen R. v. City of Livermore (2001), the California appellate court invoked Section 230 to defend a public library: The parent of a library user claimed that lack of filtering software on the library’s internet access terminals caused her child to be exposed to harmful materials. She sued the city for waste of public funds, nuisance, and premises liability. The court rejected causes of action against the library, relying in part on the immunity provided by Section 230.

TOMAS A. LIPINSKI is dean and professor at University of Wisconsin–Milwaukee School of Information Studies. He has worked in legal settings across the public, private, and nonprofit sectors and publishes and speaks widely on issues relating to information and internet law and policy, especially copyright in schools, libraries, and other information settings. 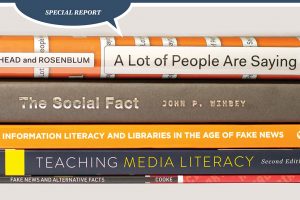