It’s not news that libraries and museums have a long and problematic history of mishandling Indigenous materials. From exhibiting culturally sensitive items to retaining materials that were unlawfully seized, the need for improvement has been clear.

Various efforts—including Northern Arizona University’s 2007 “Protocols for Native American Archival Materials,”  which was endorsed by the Society of American Archivists in 2018—have sought to remedy this. Still, appropriate handling of Indigenous collections remains sporadic. As a result, institutional claims of ownership and principles of access are sometimes jeopardized. In response, a burgeoning number of libraries are promoting culturally responsive care of collections, demonstrating leadership and restoring a long-ignored legacy of Indigenous intellectual property.

“Culturally responsive care for materials happens on different fronts,” with practices emerging from the questions and issues surrounding each collection and each distinct culture, according to Brian Carpenter, curator of Native American materials for the American Philosophical Society (APS) in Philadelphia. APS, a major repository of Indigenous content in the US, houses 1,900 linear feet of manuscripts, photographs, and audiovisual materials dating back to 1553 and representing more than 650 Indigenous cultures of the Americas. “These activities are paramount in building trustful relationships with communities,” Carpenter says.

APS began its digital preservation efforts in 2007 with the goal of providing broad access to its Indigenous collections. It partnered with Indigenous elders and scholars to select materials for digitalization and identify culturally sensitive content. APS also adopted its own protocols for Indigenous collection management in 2014, the same year it launched the Center for Native American and Indigenous Research to connect source communities and scholars.

“[Providing this access] benefits researchers and also helps to engage Indigenous scholars, some of whom have wanted to access the collections for years,” Carpenter says. “Collaborating with communities improves description of materials, helping our library represent Indigenous collections more meaningfully and accurately.”

“Unless a collecting institution addresses the needs of a community, it is not, ethically speaking, in a position to create and manage Indigenous content,” Holland says. “Noncollecting provides solutions to the issues associated with lack of adequate care of Indigenous materials and, in some cases, helps to avoid violation of Indigenous intellectual property rights. Instead of collecting, an institution can invest in forging relationships with communities toward co-stewardship of collections that already exist.”

Amherst (Mass.) College’s approach to culturally responsive collection care is grounded in the documentation of Indigenous literary history, starting with the 2012 hiring of two Native Studies faculty and the purchase of a 1,500-volume collection of Native-authored books. It grew to become what Mike Kelly, Amherst’s head of archives and special collections, describes as a project to call attention to Indigenous authorship. One long-term goal of this initiative: displaying catalog data on digital maps—in close consultation with Indigenous communities—to better visualize Indigenous intellectual traditions.

“We are attempting to dismantle [the] stereotype that oral cultures cannot also have written traditions,” Kelly says. “We are also working against a history of Indigenous experience with research, wherein scholars regularly stole stories, published them, altered them, and even used them as evidence against Indigenous populations. We do not want to repeat those behaviors.”

These efforts initially unfolded as a collaboration with Amherst faculty and the Five College Consortium’s Native American and Indigenous studies program, which connects the library with tribal communities of New England and beyond. Involved faculty have attended the conference of the Association of Tribal Archives, Libraries, and Museums, forming relationships with Indigenous communities across North America. Amherst professors also teach courses built around Indigenous collections.

“We recognize the limitations of standard library cataloging and the need for interventions to highlight Native authorship,” Kelly explains. For example, he says, Library of Congress puts work by a Canadian Mohawk author, like E. Pauline Johnson, under one classification, while works by a US Mohawk writer, like Maurice Kenny, end up in another, thus erasing their tribal identities. Amherst adds notes about these authors’ tribal affiliations to each record to change that. The collection also uses the LC subject heading “literary hoaxes” to clearly identify authors who falsely claimed Native identity, thereby retaining them as part of Native literary history’s wider context.

“Many standard practices for rare book cataloging support culturally sensitive collection care, such as provenance,” Kelly says. When Amherst acquires books directly from Indigenous authors, the library asks them to inscribe the book to the collection, and those inscriptions are recorded in standard provenance notes in the catalog.

“We want to embed the history of the collecting in the collection metadata,” he says. “Transparency about how we are acquiring materials is one way of being accountable to communities.”

ULIA GOSART is a scholar and educator who examines the impact of institutional constraints on policies concerning protection of Indigenous heritage and Indigenous political representation. 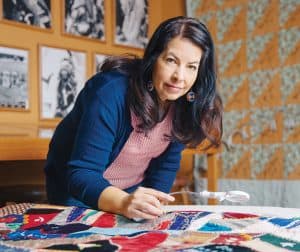