Melissa Bennett, Luke Kirkland, and Alexandra Remy—all librarians at public libraries in the state of Massachusetts, and all cohort members of Harvard University’s Democratic Knowledge Project—knew they wanted to engage teens around local politics, community service projects, and social issues. So before turning to Ten Questions for Young Changemakers, a list of guiding questions for adults working with teens, they started at ground zero: ordering pizza.

“I knew I wanted to do something about civics, but I didn’t know where to begin. I bribed [teens] with Pizza and Politics,” Remy, branch supervisor at Springfield City Library, told attendees at “Young Changemakers in 21st Century Libraries,” a January 25 program at the American Library Association’s Midwinter Meeting in Philadelphia.

Remy soon learned what mattered to teens in her library—and what didn’t. “Kids had no sense of what voting was, or sense of responsibility to each other,” she said of the teens in Springfield, a city where more than 27% live under the poverty line. “I wanted to teach teens about responsibility, community, and the diversity that’s in their community.”

What resulted was YOUth Matter, a group of 13 teens completing two stipend-funded service projects—one with the district attorney to highlight the dangers of vaping, and the other a cleanup project to beautify the Forest Park neighborhood. Over the course of the projects, teens met new faces in the community—teachers, city councilors, police officers—and learned more about the inner workings of their city.

“Community isn’t just this big grand thing, but it’s also small, mundane things that make a community,” said Remy. “They were just kind of average kids, and it gave them a time to shine and build confidence.”

Bennett, young adult and assistant children’s librarian at Turner Free Library in Randolph, said the teens at her library decided on creating short video documentaries for their Teen Changemakers program—and yes, there was pizza.

“We brainstormed this big list about things they wanted to talk about and whittled it down to four: racial profiling, immigrant rights, women’s reproduction rights, and Black Lives Matter,” said Bennett. Teens handled all of the research, script writing, production, and post-production work for their films, and were encouraged to try unique ways to tell their stories. “A lot of them want to be on YouTube and be online stars, so learning how to edit was really exciting for them,” she said.

In addition to learning job skills and sharing their point of view with the community, another stimulating aspect of the project was getting attention from local media. “They had never been interviewed before,” said Bennett. “They were really excited to see people from the community—adults—interested in something they were working on.”

For Kirkland, teen department head at Waltham Public Library, the goal has always been about building trust, taking risks, and asking teens what they want the physical space of the library to be for them. What resulted is a twice-monthly youth-led conversation forum, Real Talk, guided by six peer leaders, with interactive activities that they design.

“We start with trust, rules, and establishing guidelines for conversation,” said Kirkland. The first series centers around topics of family, personality, friends, relationships (including information on abuse and consent), community, identity (including the concept of intersectionality), and gratitude. The second curriculum of the forum changes up a little; Real Talk has hosted sessions on management and yoga, gender equality, depression, LGBTQ life, youth-police dialogues, sexual health, and immigration.

“We serve food at every event, it’s normally pizza, but this is the spread for Black History Month,” Kirkland said, motioning to a buffet of food on the projection screen. “My role is to help them come up with the most engaging events they can.”

Additionally, Waltham Public Library’s lawn-sign project has been getting national attention. Teens are asked to fill out open-ended statements (“freedom from…,” “freedom for…,” “freedom of…,” “freedom to…”) as a way to express their beliefs and experiences. The lawn sign initiative resulted in more than 400 unique statements from teens, including such messages as “freedom from being catcalled,” “freedom from suicidal thoughts,” and “freedom to wear my hair how I want.”

“We kept inviting [other libraries] to participate, so Springfield and Randolph and Brookline all participated this year,” said Kirkland. “If you take two seconds to read them, you can sense what teens who can’t vote want adults [to vote for].” 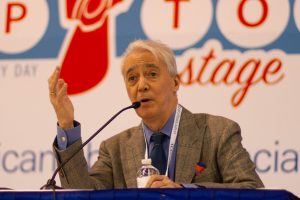 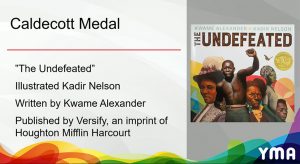 Top books, video, and audiobooks for children and young adults revealed at Midwinter in Philadelphia