“There weren’t any rules in comics when I broke in,” said Brian Azzarello, veteran comics writer and author of the series Faithless. “Everybody was making it up as they went along.” Still, comics and graphics novels have a reputation for being a single-genre medium full of superhero and adventure stories, so what are the rules that were holding it back?

At “Breaking the Rules of Graphic Novels,” a discussion at ALA Virtual on June 25 sponsored by BOOM! Studios and moderated by Filip Sablik, its president of publishing and marketing, panelists explored the ways comics are breaking free of their reputation and appealing to ever-larger audiences.

The past reputation of comic books isn’t wholly unearned. Ryan North, who began his comics career in webcomics and is now working on a graphic novel adaptation of Slaughterhouse-Five, recalled his hometown comic bookstore, which was right next to an adult bookstore. “The adult bookstore had had a lady in a bikini in the window and the comic book shop had She-Hulk in a bikini in the window,” he said. “I feel like there can be this perceived rule of format, but audiences and readers are very interested in seeing things that are new and are pushing beyond these preconceived ideas of what you can do.”

“At first I imagined that there were all these rules, that you have to write a certain way,” said Gabby Rivera, author of the young adult novel Juliet Takes a Breath and the graphic novel b.b. free. “I realized that wasn’t working for me, and I just wanted to write how I talk and tell the stories that matter to me and my friends and my mom.” And, when it comes to creating comics, “all the ideas that I have that are supersonic, out-of-this-world ideas are welcomed and accepted. How I tell my stories is really valued and appreciated.”

Even at the largest publishers, “the only rules were sticking with canon,” (the established history of characters and settings), said author Roxane Gay, who entered the comics industry by writing for Marvel. “Other than that, I sort of just made my own rules.… It’s the one genre I work in where people don’t say you can’t do that, and instead they try to figure out how to make what I want to do work.”

“I wasn’t aware of the rules, and I think that gave me freedom and a license to develop my own voice,” added Tracy Lynne Oliver, coauthor with Gay for graphic novel The Sacrifice of Darkness. “The only rules I knew were panel and page count.”

Graphic novels deserve to be seen as a medium, not a genre, said North. In Japan, there’s a much broader appreciation for the variety of stories that can be told through comics, Azzarello noted. “Japan’s got cooking comics, for crying out loud!”

When she was working at Marvel, Rivera noted, “I couldn’t find a lot of girl adventure comics that were wild and magnificent and lush.” But she is excited by the freedom afforded in being able to write that kind of story outside of the major comics canons. “I get to talk about a post–climate change America through the eyes of a young, queer, Puerto Rican girl.”

Speaking about her time at Marvel, Gay related, “I was determined to write a love story about two Black lesbians who did not die, and that’s what I did.” Still, large comic publishers retain the intellectual property rights for their characters, and  that can limit the earning potential of individual creators. “How you earn a living dictates how creative you can be,” she said.

And with a growing audience and a more diverse pool of creators, more stories are being told. “Going to a bookstore and seeing different genres of comics on the bookshelves is now achieved,” said North.

“It is revolutionary when you’re working in predominantly white spaces, and you’re not treated as an other, and your ideas are given the same energy to flow and give life,” said Rivera. 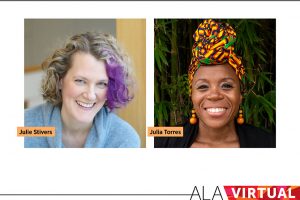