How Louisiana's state library changed the way it plans for disasters

This post is the second in a six-part series commemorating libraries and librarians 10 years after Hurricane Katrina.

When Louisiana State Librarian Rebecca Hamilton was appointed to her position in July 2005, she became the youngest member of Chief Officers of State Library Agencies (COSLA). She entered an agency that hadn’t updated job descriptions in 20 years and kept its backup server on the Gulf Coast, in a more vulnerable location than inland Baton Rouge. She had big ideas for improving operations starting in the fall. And then, less than two months on the job, Katrina happened.

“With Hurricane Andrew in 1992 it was more about, ‘Let’s save the books.’ Katrina was the first real storm post-internet,” says Hamilton.

Hamilton and her staff got to work immediately, creating and hosting a website of resources for evacuees, setting up a donation account through the Louisiana Library Foundation to accept contributions on behalf of damaged public libraries, coordinating computer and book donations from fellow state librarians, and staying in close contact with public libraries across her state to coordinate assistance based on specific needs. She even worked to reassure ALA that New Orleans would be ready for its Annual Conference in 2006. “I told my office, ‘We want the librarians because they’ll come in with their hammers!’” says Hamilton.

Despite the fact that Katrina caused 35% of the libraries in Louisiana to close at one point, the overall number of visitors to libraries immediately following the storm was down only 1%.

“Even people who weren’t regular library users knew they would get help at a library,” Hamilton says. People sought out libraries to file insurance and FEMA claims, email loved ones, and look for work. Hamilton recognized libraries were at the center of recovery and the idea that traditional disaster planning—which prioritizes collections recovery over business continuity—was not effective. What’s more, having the numbers in front of her, she was taken aback when Cameron Parish (La.) Library was denied assistance from FEMA with one sentence: “Libraries are not essential services.”

Hearing that did not deter Hamilton. If anything, FEMA’s remarks closely aligned her and fellow COSLA members—including Mississippi Library Commission Executive Director Sharman Smith, Alabama Public Library Service Director Rebecca Mitchell, and Florida State Librarian Judith Ring, all dealing directly with the aftermath of Katrina, and all now retired—to petition FEMA and pressure the agency to change the policy of its FEMA Public Assistance Program. According to a 2011 article Hamilton wrote for Public Libraries Quarterly, FEMA did so in 2010, designating libraries as temporary relocation facilities during major disasters and emergencies.

I told my office, ‘We want the librarians because they’ll come in with their hammers!’ —Louisiana State Librarian Rebecca Hamilton

In truth, thanks to Katrina and later Hurricane Rita, both of which showed the state’s emergency plans for libraries to be inadequate, Hamilton was able to streamline her agency on a quicker timetable. She revamped the emergency and backup plans for her state library, which remains a part of the overall state plan. By the time hurricanes Gustav and Ike showed up in 2008, her plans were put to the test. About 95% of Baton Rouge lost power, but the state library did not. “The state didn’t necessarily get better prepared,” says Hamilton, “but we did.”

When AL spoke to Hamilton back in October 2005, she speculated that it might take 10 years for the libraries in her state to fully recover. When asked if she thinks they have, she says yes.

“It’s been 10 years, but it hasn’t been too long since the most recent library opening,” Hamilton says. “Some libraries took longer to rebuild because of parish governments or building engineers. Nobody wanted to build back in a vulnerable place.”

“Louisiana libraries are thriving,” she says. “We have people who work hard in their small rural communities to give the best service that they can.”

But the vulnerable place for Louisiana libraries right now might be funding. “When people say, ‘I’m two paychecks away from being homeless,’ I think that’s the same for libraries,” says Hamilton. “I never say no, ever, to donations because I believe that public-private partnership is what keeps us afloat.”

She hopes that a new administration, to be elected in the Louisiana gubernatorial race this fall, will restore state aid for public libraries. “All of the candidates have said to me that they value libraries and say that they want to restore state aid,” says Hamilton.

Terra Dankowski is an associate editor for American Libraries. 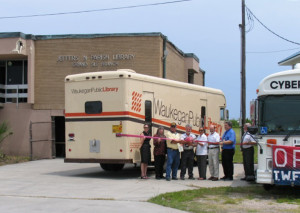 How communities recovered and rebuilt following the storm