You Can’t Prepare for the Future! Or Can You?

Challenging the concept of a library in the future

Marcellus Turner, executive director and chief librarian at the Seattle Public Library, spoke at the Midwinter Meeting on Sunday about preparing libraries for the future. He began with audience participation in a brainstorm about the future of libraries. Almost every idea provided by the crowd had to do with the physical space. The spectators offered suggestions about sustainable spaces, accessible facilities, both quiet and active spaces, and flexible spaces.

Turner challenged attendees to think in a different way about the future of libraries. He had photos of the sleek Seattle Central Library that people called “futuristic” when it was built. But the library could not have prepared for every possibility of the future. However, what the library did do was “liberate thoughts of what a library could be.”

Some questions Turner posed for those preparing for the future included:

Turner explained that libraries are very good about reacting to change created by other industries. When we are thinking about our future, we need to identify likely future scenarios and think about the impact. With these in mind, you would create a “strategic direction” rather than a strategic plan. The “direction” would include three sections first: a business model, then
a program of service, and, finally, areas of impact. Turner has identified nine “disrupters” that impact the strategic direction. These future-ready disrupters can be in many different combinations:

In closing, Turner offered three key management imperatives. First, preparing patrons and staff for the changes to the traditional concept of a library. Second, developing and educating library staff with the skills and training for the challenges of the future. And thirdly, fulfilling the customer service and engagement component of connecting with patrons in the digital space. 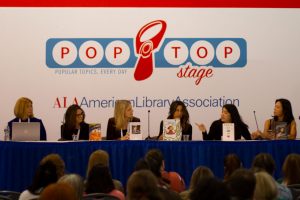 YA authors discuss how they approach mental health in their work 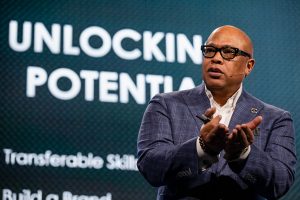