The second meeting of the ALA Council in San Francisco opened with a moment of silence for Cynthia Hurd, a victim of the June 17 shooting at the Emanuel African Methodist Episcopal Church in Charleston, South Carolina. Hurd was the manager of the John L. Dart branch of the Charleston County Public Library. The resolution honoring Hurd is ALA Memorial #26.

ALA President Courtney L. Young then recognized the retiring councilors and executive board members.

Mary Rzepczynski, chair of the Committee on Organization, presented an action item proposed at ALA Midwinter 2015 to clarify the committee composition description for the Budget Analysis and Review Committee (CD#27.1). The motion passed.

Julius C. Jefferson Jr., president of the Freedom to Read Foundation (CD#22.1), provided updates on the foundation’s current legal cases, Banned Books Week, and the Intellectual Freedom Education course at the University of Illinois at Urbana-Champaign. He also announced that executive director Barbara Jones will retire at the end of this year.

A Resolution on Improving Access to Spanish and Bilingual Books for Children in Detention Centers (CD#38) was deferred until Council III on Tuesday. 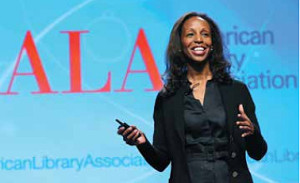 Sarah Lewis: The Art of Striving

President’s Program keynote discusses the up side of failure 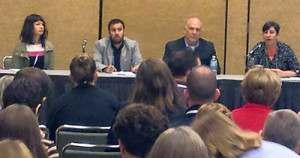