As social justice and the issues of equity, diversity, and inclusion continue to gain prominence in the national sphere, the 2017 ACRL conference in Baltimore has presented a great opportunity to examine how this evolving conversation is influencing developments in academic libraries.

What would it look like if academic libraries incorporated more equity, diversity, and inclusion into their everyday work?

Members of the Diversity, Inclusion, and Social Justice (DISJ) task force of the MIT Libraries’ Collections Directorate have explored this question, looking at library activities—including archives, technical services, collection development, and scholarly communications, as well as the impact on market forces that libraries can bring to bear—for opportunities to promote marginalized voices.

“This is one of the most exciting things I have done in my career,” said Michelle Baildon, collections strategist for arts and humanities and a science, technology, and society (STS) librarian, who presented a poster March 23 titled “Creating a Social Justice Mindset” that outlines the task force’s work.

In its report, DISJ examined the larger sociocultural, political, and economic factors at play that influence academic libraries and how they can adversely contribute to systems of oppression. The report also outlines the ethical frameworks of ALA and the Society of American Archivists, both of which place the library profession in direct opposition to such oppression.

Following its analysis, DISJ came up with more than 40 recommendations to implement in libraries to help integrate diversity, equity, and inclusion into daily practice.

Some of these recommendations include:

The full report from DISJ can be read found here.

The conversation on privilege and social justice

Drawing on personal experiences as a teacher and academic in Alberta, speaker Darren Lund discussed identity and privilege, as well as strategies for engaging individuals in social justice.

Lund, professor at the University of Calgary’s Werklund School of Education, talked about his almost-accidental introduction to social justice work. As a young high school teacher in Red Deer, Alberta, he helped his students start Students and Teachers Opposing Prejudice (STOP).

“I was just a rookie teacher in the 1980s,” said Lund. “I didn’t set out to become an activist.” His class of 27 boys and three girls in a 10th grade remedial language arts class had other ideas.

When an Aryan Nation group decided to set up a camp on the outskirts of town, his students wanted to take action. They reached out to the local radio station, introducing themselves as a new antiracist group, with Lund as its leader.

“The kids were making speeches and asking for help writing letters to the mayor,” said Lund. “Then it dawned on me: Public speaking, writing, these are all part of the language arts curriculum.”

From there, STOP grew and lasted for 20 years, winning many awards, hosting demonstrations against violence, hosting a punk rock benefit against discrimination, and forming Alberta’s first gay/straight alliance program.

Now a leading researcher and activist in Canada, Lund sees both challenges and promise in social justice and equity issues, and he cautions against self-congratulation.

“We really need to move beyond celebrating diversity,” he said, “and move toward tackling equity issues.”

Lund used the example of Canada’s reputation of being a tolerant nation. He observed that this strong narrative runs counter to history and the actual experiences of marginalized people there.

“Did you know that we had slaves here?” Lund asked the audience. He also cited black and Asian segregation in Canadian communities, internment of Japanese-Canadians during World War II, and the abuse and attempted cultural genocide of Canadian First Nations in government-sponsored residential schools that existed before confederation and lasted until 1996.

“We don’t really speak about whiteness in Canada,” Lund said, before showing slides of police and fire recruits and city councilors—all white.

His advice to audience members was that they pay attention to diversity issues and avoid so-called “color blindness.” He also suggested that people—particularly white people—be cognizant of how they implicate themselves in systems of oppression. What’s most important, Lund noted, is that “you should always open yourself to ideas from young people.”

He concluded: “As always, the best time to start is now.” 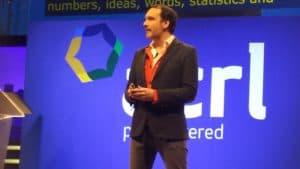 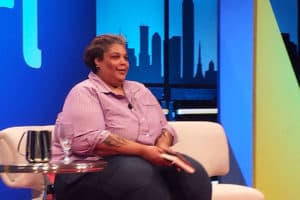