This post is the fifth of a six-part series commemorating libraries and librarians 10 years after Hurricane Katrina.

In 2005, Alabama Public Library Service Director Rebecca Mitchell told American Libraries that the most damage to libraries in her state occurred in Mobile County. That’s where Mose Hudson Tapia Public Library in Bayou La Batre, Alabama, was completely destroyed, and materials contaminated by mold could not be salvaged.

The city built a new facility—renamed  City of Bayou La Batre Public Library—at a new location approximately two miles north in Irvington, that opened in early 2007. “The new library is far enough away that, even if we had severe flooding, the building would be okay,” says Director Patricia Sebert.

Though Sebert was not living in the area when Katrina hit, she still sees evidence of the assistance that came to her library from afar.

“A lot of our books have a stamp in them that says they were gifted from the Czech Republic,” Sebert says. The country gave the library more than $110,000 for the purchase of new books back in 2006, AL reported, when then-library administrator Ada Williamson was temporarily running operations out of an office space in a strip mall.

Coming Together as One Mississippi 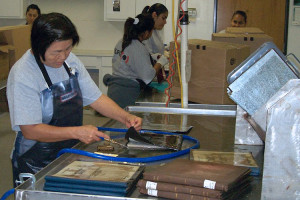