The takeaway from the International Federation of Library Associations and Institutions’ (IFLA) Asia and Oceania Section presentation on August 15 was how libraries in many countries—from highly industrialized economies to fragile island states, from the Middle East to French Polynesia—can help people find the information they need to create sustainable communities.

Section Chair Jayshree Mamtora said that the problems these countries face—relations with indigenous peoples, developing economies, immigration, climate change, multilingual populations, and communication over vast distances—are all being addressed by libraries that are experimenting with new ways of contributing to the social and economic development of the communities they serve.

Keynote speaker Loida Garcia-Febo, a library consultant with international expertise and a member of the IFLA governing board, said, “Libraries have the capacity to organize knowledge in ways that can help people to increase their quality of life and promote lifelong learning opportunities.” Libraries are using their powers to do good, she added. “We are trying to save the world.”

“Library efforts have a cascading effect,” Garcia-Febo said, “from impacting our local areas, to the city, country, region, and the world.” She noted some of the ways citizen access to information can be used as a tool for education, engagement, and empowerment:

“When it comes to connecting people with information,” Garcia-Febo said, “librarians do it better.” Because libraries are essential to global development, IFLA was instrumental in getting access to information included as part of the 17 Sustainable Development Goals of the United Nations to be achieved by 2030. Sustainable Development Target 16.10 is to “Ensure public access to information and protect fundamental freedoms, in accordance with national legislation and international agreements.” The 2030 Agenda is a global plan of action for people, the planet, and prosperity. She added, “We hope these initiatives encourage associations, national libraries, and librarians in general to advocate for the inclusion of libraries in national government agendas.”

Margaret Zimmerman, an LIS doctoral student at the University of South Carolina, offered her research findings that link the literacy of mothers in 44 Asian countries to maternal and child health. In Kerala, India, in the 1990s, an increase in female literacy reduced the deaths of children under 5 years old from 156 to 110 per thousand. In general, Zimmerman found that “literate Asian women are less likely to die as a result of pregnancy or childbirth,” and “their children had increased odds of surviving delivery and the first five years of their life.”

Prasanna Ranaweera, director of the National Institute of Library and Information Science at the University of Colombo in Sri Lanka, presented the results of a study the institute conducted in the remote village of Dodamgolla in Uva province. He found that improvements in “domestic information management,” which he defined as “managing household information efficiently and effectively to uplift the community lifestyle,” resulted in improved student performance in the local schools. Household information included things as simple as arranging home study spaces and schoolbooks tidily, using mobile phones and television for educational purposes, maintaining first-aid kits, and managing home gardens efficiently.

Irhamni Ali of the National Library of Indonesia pointed out some of the many bureaucratic, technological, and political restrictions on information sharing by libraries in his country and called for more government transparency and public participation in libraries to improve the quality of life.

Opeta Alefaio of the National Archives of Fiji was unable to attend the IFLA conference, but Paul Nielsen, a colleague from Australia, read his paper. In 2014 the archives embarked on a program to bring relevant historic and cultural documents and photos to the remote islands of this Pacific nation. As a result of this “government roadshow,” Fijians for the first time saw documentary proof of their oral traditions and, in some cases, sons and daughters saw photos of their parents and grandparents for the first time. As an example, see the YouTube video, “Eparama Finds Priceless Photograph of His Father at Archives Outreach in Namosi.” The archives also made use of Facebook to publish historic photos that Fijians could add information to and share with their friends and relations on remote islands. One photo, for example, of Beqa villagers participating in a fish drive in 1947 was viewed more than 7,000 times and garnered dozens of comments. 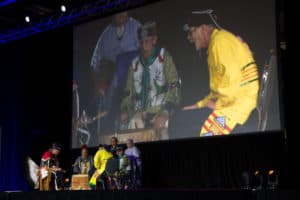 Photos from the 2016 World Library and Information Congress 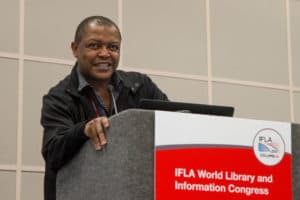