Author declares love for the Bard in lively session

Despite her body of work in futuristic and speculative fiction, Margaret Atwood displayed a somewhat uneasy relationship to modern technology in her address at the 2016 American Library Association Annual Conference and Exhibition. When the announcement was made before the Canadian author and poet took the stage that she requested no photos be taken during her talk, the disappointment in the room was audible.

Atwood titled her talk “Shakespeare and Me: A Tempestuous Love Story,” a nod to her upcoming novel Hag-Seed, which reimagines The Tempest in the modern era. “People have been redoing Shakespeare for a long time, often with odd results, and I too have redone Shakespeare, also with odd results,” she said.

The book is part of a series from Hogarth Press in which authors, including Anne Tyler and Jeanette Winterson, reinvent the Bard’s plays as novels.

Atwood discussed her love of Shakespeare and the choices she made while writing the book, giving the audience a glimpse into her creative process. Attendees could also receive an advance copy of the book, but, she warned, “No spoilers on the internet or you’ll be imprisoned in a cloven pine tree.”

She first encountered Shakespeare in the 1950s, a time she described as “early Betty and Veronica,” while in high school in Toronto. His work has shown up repeatedly in her own work over the years—the local Shakespearean theater company Earle Grey Players in the novel Cat’s Eye, short stories written in other characters’ perspectives in “Gertrude Talks Back” and “Horatio’s Version,” and most recently in “Revenant,” in which an unpleasant poet and his much-younger girlfriend take in a terrible performance of Richard III. Atwood noted that she enjoys writing unpleasant characters, and that Shakespeare got as much joy creating an Iago as an Imogen. “People who object to works of literature because people in them are not people you would not want to marry or have as a roommate are missing the point.”

When asked to participate in the Hogarth series, she said The Tempest was her first choice. Although she found it daunting to do as a novel, she has tackled the play before, writing about Prospero in A Writer on Writing.

Atwood sets Hag-Seed in 2013 in a prison, noting that every character in The Tempest is imprisoned at some point. The original play is also a musical and a play about putting on a play, themes that figure strongly in the new novel.

In the spirited Q&A at the end of the session, Atwood was asked about past and future projects, including the upcoming Hulu adaptation of The Handmaid’s Tale (she’s seen some scripts and thinks they’re quite good), the piece she wrote for the Future Library project (she can’t say anything about it), and whether companion robots are a good idea for the sick and elderly (“I think people are preferable unless you really hate them”).

And for the record, upon her demise she does not wish to be frozen, downloaded, or shot into outer space. “I have other plans,” she said. 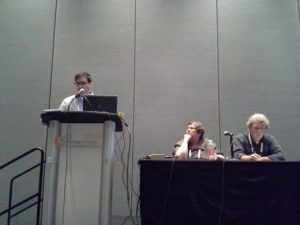 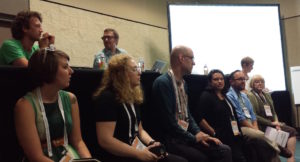 The secrets to running a great makerspace