Archivist of the United States David Ferriero delivered a plenary address on August 17 to attendees of the International Federation of Library Associations and Institutions’ 2016 World Library and Information Congress in Columbus, Ohio. Ferriero, the first librarian to hold this position since the National Archives and Records Administration (NARA) was established in 1934, was appointed September 6, 2009, by President Barack Obama specifically to implement the president’s vision of open government. NARA is taking a leadership role among all the agencies to ensure that federal records are made readily available to inform the public.

In December 2009, Ferriero said, the president issued an Open Government Directive that called on each government agency to submit an open government plan to increase the availability of its documents. NARA is now developing its fourth plan with 50 specific commitments to strengthen open government. These feed into a National Action Plan (currently the third) for the US that serves an endorsement of the international Open Government Declaration, launched in September 2011, which has been signed by 70 countries.

Ferriero said the “National Action Plan includes 11 commitments to information access, five of which are owned by the National Archives.” These are to:

“Government shares a common mission to help people improve their lives,” Ferriero said. “To use a meme currently used by the American press, ‘Let’s make the world great again.’”

During the question period, Ferriero shared some of his major informational pet peeves. “I am seriously concerned about the lack of civic instruction in the K–12 curriculum,” he said. “Kids are graduating without knowing how government works, how laws are made, what the three branches of government are, or what separation of powers means. This is a huge problem that is reflected in contemporary society.” In response, NARA offers a special online DocsTeach tool that offers primary documents from the National Archives for teachers and documents-based activities for students.

Ferriero said his biggest challenge was how to capture social media generated by government agencies. “This one keeps me up at night,” he said. “We offer some guidance on what to keep. For example, if the information is original, that is most important; repeated information is less important.” Nine years ago, NARA did not do much to retain social media. “We’ve been playing catch up,” he said. “Currently we are on 16 different platforms. We need to use the tools that create this data to assess and capture it effectively.”

Ferreiro said that NARA still stores paper records, but that “one of my goals in our strategic plan is to digitize everything we own and get out of the paper business. As the kids say, if it isn’t online, it doesn’t exist. In 2019, paper records will no longer be accepted from agencies, only electronic records.” He added that the federal government has been handicapped by a poor technological infrastructure, but that is changing. “We are also attempting to raise the profile of records managers in agencies, especially those that have been using clerical staff,” he said. “We want to get it right, so we are beginning to require a senior agency officer to be in charge of agency records, not a records manager.” 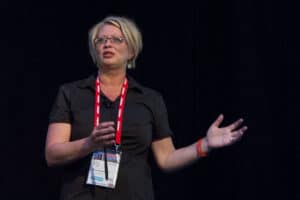 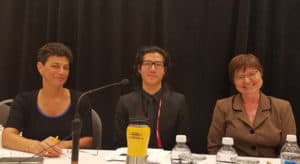