Exit West by Mohsin Hamid (Riverhead, an imprint of Penguin Random House) is the latest American Library Association (ALA) Book Club Central SJP Pick, chosen by Honorary Book Club Central Chair Sarah Jessica Parker. Exit West has been shortlisted for the 2017 Man Booker Prize, longlisted for the ALA Andrew Carnegie Medal for Excellence in Fiction, and is a finalist for the 2017 Kirkus Prize.

The selection helps kick off the 12th annual National Friends of Libraries Week, October 15–21, an initiative of United for Libraries. The celebration recognizes the advocacy and fundraising efforts of Friends groups across the country. Parker is an honorary lifetime board member of United for Libraries, a division of ALA.

United for Libraries President Steve Laird said, “Friends groups do so much on behalf of their libraries, from funding summer reading programs to hosting author events and sponsoring book clubs.”

Book Club Central debuted in June as a resource for book clubs and readers everywhere.

Exit West is a love story about the forces that transform ordinary people into refugees—and the impossible choices that follow—as they’re driven from their homes to the uncertain embrace of new lands. In a starred review, Booklist states, “Caught in the whirlpool of refugees from around the world, Saeed and Nadia are tossed around like flotsam, the necessity of survival binding them together more than any starry-eyed notion of romance ever could… spellbinding writing.” The New York Review of Books writes, “Skillful and panoramic from the outset… [A] meticulously crafted, ambitious story of many layers, many geopolitical realities, many lives and circumstances.”

“Mohsin Hamid’s Exit West gives a deeply real, beautiful, intricate, and electrifying look at what it means to be an immigrant right now,” Parker said. “This tale of two people forced from their homeland and searching for a home elsewhere is transporting and illuminating. I was swept away by this gorgeous, otherworldly novel, and I’m so excited to offer it as our second selection for Book Club Central, as I’m convinced every reader will feel the same.”

Hamid is the internationally bestselling author of Moth Smoke, The Reluctant Fundamentalist, How to Get Filthy Rich in Rising Asia, and Discontent and Its Civilizations. His award-winning novels have been adapted for movies, shortlisted for the Man Booker Prize, and translated into more than 30 languages. His essays and short stories have appeared in The New York Times, The Washington Post, and The New Yorker, among other publications. He lives in Lahore, Pakistan, his birthplace, after many years in New York and London.

Parker will make her next book selection this coming winter. Her inaugural pick was No One Is Coming to Save Us by Stephanie Powell Watts. 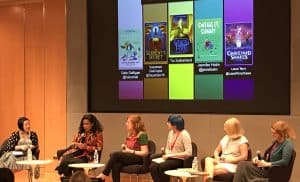 Professional Day at the Comic Con

Applications due November 3 for library workers interested in pilot program