The theme of the 21st annual Martin Luther King Jr. Holiday Observance and Sunrise Celebration was “The Civil Rights Movement: ‘Tired of being segregated and humiliated; tired of being kicked about by the brutal feet of oppression.’”

An estimated 300 people attended the 6:30 a.m. celebration Monday, January 27, at the ALA Midwinter Meeting & Exhibits in Philadelphia. In keeping with annual tradition, more than a dozen library leaders read selected passages from King’s work to recognize the connection between the library world and King’s advancement of peace and social justice.

Keynote Imani Perry, who is professor of African American studies at Princeton University, began by speaking of “our digital convenience” and the ironic inability “to meet the tragedies of the world with effective action.” She cited such tragedies as environmental racism, elder isolation, addiction, the incarceration of youth, violence, poverty, and homelessness. “The loneliness of the suffering of others echoes in our personal lives,” she said. “Our private pains feel ever more solitary along the busy mass and busy-ness of the world.”

One suggestion to reconnect with “the human condition,” she said, is to “wean” ourselves from our phones and remote controls, instead reaching for words and books. “Reading and study are necessary to make a more just society and world,” Perry said. “We can be moved and nurtured by word.”

Perry was born in Alabama, where, she said, reading was once an act that could get you killed as well as an act of insurgence. King, she said, “pushed against a Jim Crow world, not just a Jim Crow South.” But he was not alone. Perry cited the complex network of organizers, educators, students, lawyers, domestic workers, agricultural laborers, and laborers of all stripes who advanced the civil rights movement.

But the work we do as a community and in opposition to oppression is also of current and future significance, she said. Hope “is a matter of practice in our planting of seeds and in our deeds.”

Perry said that King’s statement that all life is interrelated echoes. “Whatever affects one directly, affects all indirectly,” she said, quoting King. But she also acknowledged the civil rights leader’s “human fallibility” and credited the works of Bayard Rustin, Coretta Scott King, Ella Baker, and Fannie Lou Hamer.

“Even at our bravest,” she said, “we are human.” Perry cautioned against making “icons out of our ancestors,” as it lets us off the hook. And it’s a good reminder of “how essential the collective is.”

Perry concluded with talking about the “grace of the young” in fighting for freedom. More important than commitment and conviction, she said, is imagination. Our task is to put words in the hands of young people—history, science, art, literature—“and pour into them, and as such, into our collective possibility.”

The event concluded with audience members joining hands to sing “We Shall Overcome.” 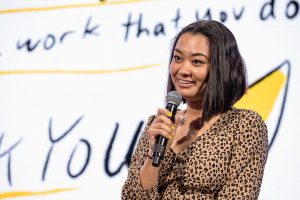