Late-night host, actor, and author Samantha Bee acknowledges that these are strange times.

“Of course we’re not living in the administration we want to be living in, naturally,” she told the crowd at the Closing Session of the Public Library Association 2020 Conference in Nashville on February 29. “As I sit here, the president is doing a press conference on coronavirus. I hope it goes really well and we’ll all feel really calm after,” she joked.

But amid her trademark political and progressive repartee, Bee shared with the crowd a message of joy and a sense of mission.

“We just have to keep going. In this current era, it’s not just TV people who have to find the energy to keep going—it’s all people,” she observed. “We try really hard to be purposeful, but we do a lot of dick jokes, and that’s okay too.”

In a sprawling conversation with journalist Caroline Modarressy-Tehrani, Bee touched upon everything from the election cycle to her celebrity idol, her escapist reading material to how her show Full Frontal with Samantha Bee comes together.

“This election season is different. The stakes are so high. It’s a very difficult climate to do a political show,” Bee said. “I come from Canada where the election cycle is completely different—only two months where you can request people vote for you.”

She is also adamant about where she stands on certain issues.

“My opinions on some things are totally set. We should not put children in cages at the border,” Bee said. “How you treat refugees, in my opinion, tells me everything I need to know about you from top to bottom.”

When asked if sexism is present in the current election, she replied, “Whether Hillary [Clinton] won or lost, we would have felt a tsunami of misogyny.”

“We see it everywhere. It’s just what we’re steeped in … just hundreds and hundreds of years of misogyny taking us into the future, [grumble], Space Force!”

“Stacey Abrams—chef’s kiss!” Bee exclaimed to applause, explaining that she was planning on sending extra proceeds from her show’s Totally Unrigged Primary app to Fair Fight, and that Abrams would be a guest on an upcoming episode of Full Frontal.

Bee was equally effusive about another famous woman who did a segment on her show: Sigourney Weaver.

“She is so generous with her time,” Bee said. “It’s so nice when someone surpasses your expectations.”

Bee was nervous to tell Weaver that she named her daughter Ripley after her character in the Alien franchise.

“She gave me a photograph of herself—a terrifying photo from the third Alien movie and she’s bald. She had it printed up and wrote across the photograph ‘From one Ripley to another.’”

“And then I gave it to my 9-year-old daughter. ‘Ugh! I can’t put this in my room! It’s terrifying!’” she recalled, to laughter.

Bee sees the current state of media as fraught. “Our journalism is so tied to the marketplace in this country. It’s tied to ratings and tied to clicks. It’s a for-profit world,” she said, citing how entire news segments may now be devoted to individual tweets rather than deeper content.

For its part, however, Full Frontal tries to provide that depth—even if it enjoys the reputation of being entertainment and not news.

“We do constantly check ourselves,” said Bee. “We have an incredibly robust fact-checking team, a lot of journalists working on staff.”

When she isn’t burying herself in the news, Bee finds herself devouring a different genre: “I actually lean really hard into writing about food.”

It started when somebody accidentally bought her a subscription to Gourmet magazine when she was 16 or 17. “I would read Gourmet while I ate and I would fantasize about better food,” she said. “The world of that magazine influenced me deeply.”

Though escapist reading is a nice break from the current “alternate reality,” Bee maintains that libraries have a role in getting the US back on track.

“Something I think about all the time is media literacy and media criticism and what it really means to understand your sources,” she said. “That’s where you come in.” 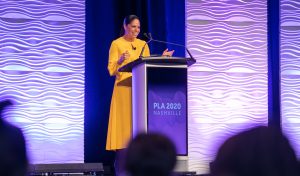 ‘We’re in the Social Justice Business’ 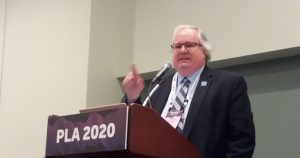 Closing In on the Census

What libraries need to know to support a complete count