Printing for a Cause

Every day the library has the opportunity to impact young lives, from a child learning to use a keyboard or enjoy a story time. And now, with makerspaces and new technology, a child has received a prosthetic limb via her library.

Five-year-old Katelyn was born without a fully formed left hand. Her parents were on the search to find a prosthetic arm for her when they discovered the e-NABLE Community. E-NABLE is a team of people around the world who work to create free prosthetic limb design plans for the upper body by using 3D printing. Once a prototype has been made they put their design on the website for anyone to download and print on their own.

E-NABLE also lists places that have access to 3D printing. The Clear Lake City-County Freeman branch of the Harris County (Tex.) Public Library is the closest to Katelyn’s family in Victoria, and they contacted the library’s Innovation Lab.

Patrick Ferrell, trainer of the Jocelyn H. Lee Innovation Lab (JHLIL), which is part of the Clear Lake City-County Freeman branch library, says, “We had printed hand parts in the past as a test, but this was the first time printing a whole hand. In this case, we wanted to help the family and we had a preexisting interest in making a 3D prosthetic, so we wanted to find a way to work with the family to make the device.”

He shares that while he was excited about working on the project, he couldn’t help but be a little nervous. “I was excited by the prospect of helping the family, but I was also worried about disappointing a 5-year-old girl. The family was willing to work with us, so that helped relieve some concern.”

Ferrell met with the family in early June to take measurements and discuss different options. He sought out a few of his library patrons who were fluent with the 3D printer and who had expressed interest in 3D printing prosthetics. Michael Craig was one of the first patrons to use the 3D printer and had been experimenting with different prosthetic designs. Robert Bannon is another frequent visitor at JHLIL who also has his own 3D printer and could print materials offsite. These men were joined by John Colborn, another patron at JHLIL. Being an engineer, he was able to assist with measurements, scaling calculations, and design input. With Ferrell’s newly assembled team, the project commenced.

After much deliberation, the team chose to print the “Unlimbited” design according to Katelyn’s needs. They worked with polylactic acid, a thermoplastic used frequently with 3D printing, which was donated by JHLIL. They also used metal fasteners, dental bands, and fishing line to connect the smaller pieces.

The dedicated team jumped right in and didn’t let anything slow them down. “We wanted it to be done in a few weeks, but it took about a month due to some printer malfunctions,” Ferrell says. “Some volunteers printed [parts] at home to keep the effort going.”

Katelyn’s father even contributed to the cause. “We weren’t satisfied with one of the 3D-printed hinge pins, so [he] went to the hardware store and found an appropriate replacement,” Ferrell says. “It’s very satisfying to know that the family participated in building the prosthetic. Now the success of the arm is due to the father’s work alongside the work done here by volunteers.”

3D printing prosthetic limbs can be tailored to each person. “We asked Katelyn what her favorite color was, and she told us pink and purple,” Ferrell says. Hence her new arm consists of about three dozen pink and purple 3D-printed parts and one dozen additional parts, such as hinge pins.

If it’s handled with some care, the prosthetic limb can last 12–18 months.

The total project cost less than $100—significantly cheaper than the $5,000–$6,000 a professional prosthetic limb would’ve cost. “It’s very cost effective to make a new one every six months,” Ferrell says. “If you’re going to spend $100 on shoes every six months, why wouldn’t you buy a new arm every six months for $100?”

“The family didn’t pay anything,” Ferrell says. “Volunteers donated everything—from the materials to their time and hard work.”

The library team had some apprehension of the finished product before they gave it to the family. “Will it fit? Will she like it? Will she break it? Will the family be happy? But now that it’s been delivered and Katelyn is wearing it, we’re very happy with the outcome,” Ferrell says.

Finally at the end of a long month, Katelyn got to open up her new arm as a present at a family party.

“The entire family was there and they all watched her open her gift,” Ferrell says. “She exclaimed ‘It’s my new arm!’ and put it straight on like she’s done it before. She seemed really pleased with it.”

The connections the volunteers made with each other are another benefit of the project. “One of the most important things a library makerspace can offer is a community of users who are willing to share their talents and passions,” Ferrell says. “For a while, some of the group only knew each other via emails they sent back and forth. But from these disparate library patrons a ‘prosthetic arm community’ was formed here at the library—this is an intangible but valuable byproduct of the work they did for Katelyn.”

The Innovation Lab at the library has already started to print another arm to test a new design. “We’re working on making another model—for demonstrations—and will be considering how to continue this work,” Ferrell says. “We were very fortunate to have the family work with us as partners, rather than just a passive recipient of the prosthetic.”

MEGAN PERRERO is an editorial intern at American Libraries. 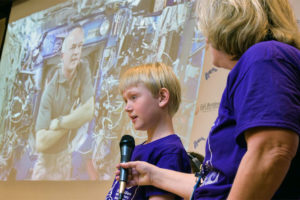 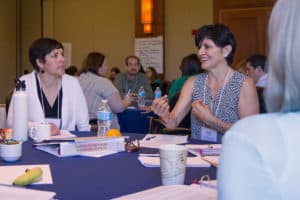 Fourth annual retreat brings librarians from around the nation