The library’s community room is quiet—too quiet, especially considering 31 elementary school kids are sitting in there. Their anticipation is palpable. Suddenly Jeff Williams, a NASA astronaut aboard the International Space Station (ISS), appears on a projector screen.

His appearance was part of Discover Space: A Cosmic Journey, a traveling exhibit that teaches library-goers about topics such as stars, planets, and gravity. The program was offered by the American Library Association’s (ALA) Public Programs Office in collaboration with the Space Science Institute’s National Center for Interactive Learning, the Lunar and Planetary Institute, and the Afterschool Alliance.

Denise Raleigh, division chief of public relations and development at the Gail Borden Public Library in Elgin, Illinois, submitted an application to NASA for the exhibit on December 15. The library was one of eight selected nationwide to host this program, which was held June 30.

The first step to submitting the application was participating in an hourlong webinar to learn more about the application process. Raleigh estimated there were 40–50 people on the call. After the webinar, the library filled out the application, which focused on community outreach for the program. “It was a competitive process,” Raleigh says. “Other people in education and museums were competing for this as well.”

Raleigh says ALA offered to promote the downlink on its various platforms if the library was able to host the event, which Raleigh included on the application. “I think with the help of ALA as a partner, we became much more appealing for a venue,” Raleigh says. “We were so grateful that ALA was ready and willing to help grow this event beyond our community.”

When Gail Borden Public Library found out February 11 that it would be hosting the event, Raleigh says she screamed with joy. Once the initial excitement wore off, the library got serious about planning.

The event invited 2nd–5th graders—who were recruited by school principals and private and home school communities, and required to fill out their own qualifying applications—to ask Williams questions. The longtime NASA astronaut video-chatted them from ISS, answering such questions as, “If you discovered a planet what would you name it?” To which Williams responded, “That’s such a significant thing to name … that it would have to be much bigger than me.”

Another question was “How many astronauts are on the space station with you and from what countries?” Williams said they typically have a crew of six, and he has been on board with Belgian, Canadian, French, German, and Russian astronauts.

With ALA promoting the event, people from all over got to tune in. “When you see the thousands of people watching the event through social media channels, we know that their messaging and promotion helped immensely,” Raleigh says.

Normally, the program allows for only half of the 31 kids who participated. However, Elgin happens to have a community connection to the space program: Hal Getzelman, lead CAPCOM, or capsule communicator, graduated from the local high school and now works in Houston at the Johnson Space Center. “He agreed to do another video chat after the ISS event,” Raleigh says. “So many more kids got to be involved. He’s been a wonderful relationship.”

The group learned from Getzelman about Ceres, the new dwarf planet; how the astronauts communicate with people in Houston; and the possibility of landing on Mars. Getzelman shared his hopes of people “getting to Mars in the mid-2030s.”

Raleigh says the program was a great success. “It was extremely positive,” she says. “We know [the program] changes lives. That’s the beauty of having something like this at a public library. It was fantastic.”

Carole Medal, executive director of Gail Borden Public Library, agrees: “To be able to create such an event where students were connected and communicated with an astronaut aboard the International Space Station was truly something quite unique.”

Raleigh sees how programs and exhibits such as these have a tangible benefit to the library with increased circulation. She encouraged event attendees to check out related resources and talk to a trained librarian for more information. “The subject matter of an exhibit gets a circulation boost every time,” she says.

“Not only did children have a once-in-a-lifetime experience,” Medal says, “we saw a 74% increase in the two months preceding the event compared to the year before.”

To coincide with a new NASA spacecraft being launched in September, Raleigh is planning a program focused on “What would your library have if it was on an asteroid?” But what it comes down to for Raleigh is inspiring learning and helping kids explore their interests. “I’m just tickled that kids are interested in science and something like this can grow exponentially.”

Medal adds that she is delighted by the library’s ongoing educational connection with the community. “We know this event had an impact on these young lives and are proud that our library hosts events and programs such as this to ignite a passion for learning in our community.”

MEGAN PERRERO is an editorial intern with American Libraries. 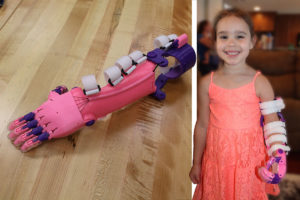 Printing for a Cause