Transforming a research library for the 21st century involves more than changing the library’s physical place. It’s a process that affects every aspect of the library’s operation, from relocating collections to reevaluating and repurposing a staff’s role both within the library and the academic community.

Catherine Murray Rust, dean of libraries at Georgia Tech University, detailed how her library undertook such an endeavor in Reimagining the Research Library for the 21st Century, an ALA Masters Series session at the 2017 ALA Midwinter Meeting. It was an extensive project, with some elements still ongoing, but it boiled down to three basic elements: renewing the library’s buildings, forging a collaboration with Emory University, and implementing organizational effectiveness.

Rust explained that Georgia Tech’s two library buildings, which date to the 1950s and 1960s, were in dire need of renovation. Plans have been drafted and the first half of funding, via a $42.4 million bond, has been secured already. The goal is to bring the buildings to code, she said, but also to reinvent them. Ninety percent of Georgia Tech’s collections are only available electronically now, and the new buildings should reflect that shift in access and stress the library’s place as a campus hub and learning center.

Rust explained that she has to reassure people when they learn about Georgia Tech’s new direction. “Yes,” she said. “We will still be a library even though there are few books.”

The collaboration with Emory University helps fill gaps in both schools’ collections. The partnership works because the schools complement each other, rather than compete, Rust said. Emory is a private university while Georgia Tech is public, and both schools differ in their research and academic leanings. As a result, they aren’t fighting for the same students or funding, and their respective library collections are different.

The schools formed a 501(c)(3) nonprofit called EmTech to independently manage the collaboration, but the shared collections are located on Emory University property. Ninety-five percent of Georgia Tech’s collection was moved there by summer of 2016, including archives and special collections.

The most challenging aspect of Georgia Tech’s reinvention involves changing how students, faculty, and library staffers view the library and its operations and also changing the effectiveness of the library as a whole, Rust said. Business strategies and new ways of approaching customer service were employed to implement this change.

“Our aim was to change what students think of when they think of “library,’ Rust noted. “We are turning upside down the relationship between the building and the service.”

This involved completely revamping the library’s organizational structure. Georgia Tech librarians no longer simply stay in the library and wait for students, faculty, and researchers to come to them for answers to questions or help with research. Instead, librarians now go out into the academic community to become active partners in the research process from the beginning. The change was met with some resistance and some staffers quit as a result, Rust said, but the librarians who stayed and new hires are energetic about their new role.

“We want to transform librarians into people who are a part of the process,” Rust said. “We want to be influencers who add value and also have a seat at the table.” 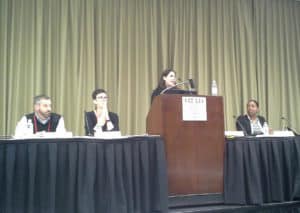 How libraries can advocate and partner on the local, state, and national levels