Erin Hollingsworth is librarian at North Slope Borough School District (NSBSD) based in Utqiaġvik, Alaska. NSBSD is the northernmost and largest school district by area in the US, covering 89,000 square miles and consisting of eight villages accessible only by plane. Efforts to provide access for remote learning during the pandemic have been hindered, she said, and solutions offered were not applicable to remote Alaskan villages.

“All levels of response have made things worse,” she said, “because it feels as though they’re working from an assumption that internet is available, and that’s not necessarily the case.” Affordable connectivity is not an option in the region—four of the eight villages are connected via satellite, which is not high-speed. “I have seen internet bills from the previous COVID-19 months ranging from $250 for limited, slow connectivity, up to thousands of dollars for individuals trying to maintain streaming for work and school,” she said.

The 2020 Census reported that 86% of households now have a computer in the home, which is not really the case (NSBSD issued MacBooks to students for remote learning during the pandemic). Hollingsworth believes these numbers will be used to show there is connectivity in the region and that broadband access is now a nonissue. The immediate need in her district is infrastructure, she said, but she doesn’t see it coming right away.

Advocacy and awareness help people understand in the interim that broadband access is an intellectual freedom and human rights issue. “Geography should not impose barriers to information,” Hollingsworth said.

Haralson County, with a population of 25,000, sits in the Appalachian foothills about an hour from Atlanta, and 100% of K–12 students qualify for free or reduced-cost lunch. During the pandemic, the livelihood and education of the county relied on adequate internet coverage, Branyon said.

Librarians in the county and from UWG gathered waivers from schools and delivered them to internet providers so internet service could be installed and provided for free until schools went back to face-to-face learning. But much of the county still lacked the infrastructure to make the effort meaningful. So librarians drove around in buses to distribute mobile hotspots, books, and assignments for students. “Literally there were children who were unable to access education during COVID-19 unless they traveled somewhere or a mobile unit came and brought a hotspot,” Branyon said. “It’s just amazing that we’re an hour away from a nonstop flight to anywhere in the world, and we can’t get internet.”

She said if the FCC expands federal funding for broadband through E-Rate programs, libraries will be empowered to do even more to keep communities connected.

ALA’s advocacy efforts involve more than just political engagement, she added; they also mean putting boots on the ground to helping librarians in rural areas. Social justice, to her, means creating a fair and equal society where individuals matter, their rights are protected, and policy decisions are based on honesty.

Marijke Visser, associate director and senior policy advocate in ALA’s Public Policy and Advocacy Office (PPAO), said that broadband access is a human right because it is important for health care, education, work, and participating in civil society, such as exercising the right to vote. “If you consider social justice as working so that everyone has access to the same opportunities and the ability to pursue them,” she noted, “then we do need to think about social justice issues when we are working toward broadband as a human right.”

In addition to broadband access, Visser said it’s important to talk about speed. The FCC’s capacity metric is 25 mb download and 3 mb upload. For most people, this works, but for a family with kids—especially now with remote work and school—that connection is inadequate. “The data doesn’t do justice to the breadth of the topic,” she said.

Visser explained PPAO’s work in this area as making the case with policymakers to include libraries in any legislation or initiatives that promote broadband access. The office relies on member stories for strong examples, she said.

ALA is currently supporting the Accessible Affordable Internet for All Act, sponsored by Rep. James Clyburn (D-S.C.) and Sen. Amy Klobuchar (D-Minn.). On the FCC side, ALA has worked historically on the E-Rate program, and the FCC received funding to create the Emergency Connectivity Fund for libraries and K–12 schools.

What can library workers do? Visser noted that ALA passed a resolution declaring broadband as a human right—see how it fits with your practices. Ask yourself: How can you be a spokesperson for it in your community? She also said the pandemic has placed a focus on broadband issues, so it’s a perfect time to get engaged if you aren’t already. Sign up for ALA action alerts at ala.org/advocacy. 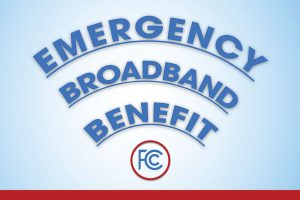