Chicago loved having so many librarians around that it just can't let us all go. #alamw15

#ALAmw15 was simply the best! I am thankful for brilliant librarians & friendly publishing colleagues. Worth all the travel drama.

So sad that #alamw15 is over. Can all my #library friends come back to Chicago, please? I miss you already!

"You had a bad day" on @DunkinDonuts #DunkinRadio. That can't be true, because I was at #alamw15 – and it was a great day!

Adjusting to post-conference life and getting back to regular programming are proving to be difficult tasks after days in the winter wonderland of Midwinter.

Little-praised parts of #alamw15 season: the post-conference clearing of the starred and unread e-mails.

If you have any ARCs you want to donate, please visit this Google doc!

Grab any ARCs from #alamw15 that you've decided not to keep? Consider donating them to On the Same Page ARC tours! https://t.co/PS1W2eXmQK

I have successfully completed my first ALA Midwinter Meeting as President. I couldn't have done it without our amazing members. #alamw15

@librarycourtney's father is on our airport shuttle! He's a celebrity to the librarian passengers #alamw15

Thanks for attending Midwinter, be it through social media or in Chicago! We appreciate your support! 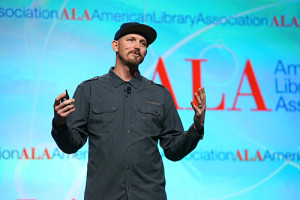