The Library of Congress’s (LC) Packard Campus for Audio-Visual Conservation in Culpeper, Virginia, is a vast complex. Ninety miles of shelving hold more than 1.1 million film, television, and video items, as well as almost 3.5 million sound recordings. Nestled among the stacks is a smaller media grouping that is growing both in size and popularity: videogames.

David Gibson, a moving image technician, is LC’s videogame steward, and he earned the role by chance. “I was the youngest person in the office, so they gave me the job,” he says, laughing. He does credit gaming as a youth and while in graduate school with providing a background to archive the 4,000 videogame cartridges and CD-ROMs and LC’s collection of strategy guides and gaming periodicals. It’s not all fun and games, however. Gibson touts the collection’s impact on conservation. “I’m interested in how digital and digital-born images like those in videogames are archived,” he says. “What we apply to game preservation can apply to other formats.”

The Bookend showcases librarians, their work, and their work spaces. For consideration, please send press material to americanlibraries@ala.org. 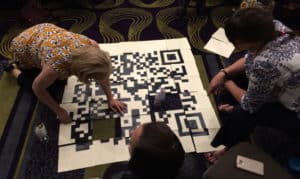